Women Riders Speak is an interview series about women and motorcycles. Through their stories, they illustrate the transformative role motorcycling has played in their life. In this interview, Christina Gould talks about her first 6,000 km and the joy she’s found in riding. 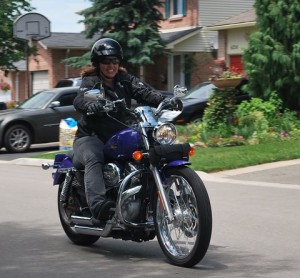 I don’t remember when it started, it seems like I have always wanted to ride. I managed to get a cousin to take me for a ride on his dirt bike when I was 7 or 8 years old. As a teenager, I rode a mini bike around a neighbor’s cottage for a weekend. This led to buying a bike from a classmate. Unfortunately, she put it under a bus just before I bought it. My mother was elated that the bike was toast. I was a little scared, so instead of riding my own, I sought out boyfriends who rode. Eventually I got married and had kids. Riding became a ghost in my past.

My bike actually found me. I first saw and fell in love with it at the Toronto Auto Show VIP Press Release in 2005. But I never believed it would be a reality.

As my daughter was becoming independent, I decided to go back to school full time. Close to graduation, life took over and made a few changes in my life. Although it seemed bad at the time, fate knows where we’re supposed to be and when; because, without those changes I never would have been found by my bike. Two years ago, at age 41, I bought it — a Harley.

Wow, did I bite off more than I could chew!

I did everything wrong right from the start. My biggest mistake was letting my husband “teach” me how to ride. I signed up for a course at Humber College, but couldn’t wait, especially when I had this big beautiful shiny ride in my garage. Off we went, and I dropped the bike. I became intimidated, scared and full of doubt. I almost cancelled the course. I figured the classes were going to be full of guys who already had a handle on their bikes, and I would just get in their way. The thing is … I did it to myself.

The classes were geared towards people who knew nothing about motorcycles with throttles, gears, handbrakes and foot brakes – ugh! So much to remember! I was with a bunch of others who also knew nothing about those things; and, there were other women there too! What a relief!

Getting up the courage to get on the road was another challenge. I spent a lot of time going around in circles in my neighborhood. As the circles widened, my husband followed me in our Jeep.

More than anything, I wished I’d had a mentor to ride with me. Guys just don’t get it.

With my local Chapter of HOG, (I’m on the executive of the Chapter as the Head Lady of Harley) I’ve managed to put over 6,000 km on my bike this year, including places like Port Dover and Gananoque. I can’t wait for next year, and some longer trips!

Women riders are different. They have this innate understanding. It’s all in the smile. We know that there is nothing we can’t do. We don’t need to impress anyone. We’re not doing this for anyone else but ourselves.

There is a freedom in riding that exists nowhere else on the planet. It’s about being alone with yourself and being okay with it. It’s about toughing it out, and holding your own, and being respected.

I still feel like a beginner, but I wish that I could go back and hold my hand and tell me that it’s all worth it. I did it the hard way … but I did it! There is glory and a sense of accomplishment in that! I DID IT!