lizjansen Posted on January 13, 2017 Posted in Adventure No Comments Tagged with , moto books

What is winter for motorcycle riders if not a time for catching up on motorcycle books?

Here’s a selection of moto reading to entertain and inspire us for the not-so-far-away riding season. If you’re looking for more, check out my link at the bottom. 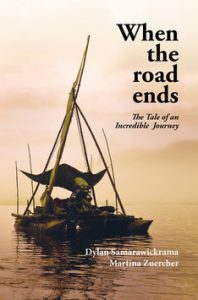 When the Road Ends – The Tale of an Incredible Journey

I heard Dylan speak at the Horizons Unlimited event in Virginia last April and his story is awesome in every sense of the word.

This story may be the most unusual and incredible motorcycle journey you will ever get to read about! It is inspirational, funny and moving, and has the quality to take you on an adventure.

As a young child, Dylan often daydreams of adventure and yearned to travel the world. However, growing up in Sri Lanka, facing extreme poverty and many hardships, his dream seemd as impossible to reach as the stars in the night sky. Yet, despite all the odds, and many years later, Dylan literally rides around the world on a motorcycle which he affectionaltely calls Bruce. After 130’000 miles, four continents and three years later, he finds himself in Panama where all roads suddenly end. Undaunted, Dylan builts a raft atop ten oli barrels, powered by his motorcycle and a tiny sail and ventures out across the Pacific Ocean to reach Columbia. And as you would expect, things do go wrong. But luckily for Dylan there are Dolphins … One of the most authentic and incredible adventures ever. “A true story told in an outstanding quality.” – Swiss National Radio and Television. Originally published in German as “Am Ende der Strasse”. 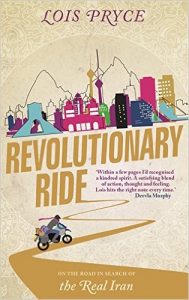 Revolutionary Ride: On the Road in Search of the Real Iran

Lois’s latest book has just been released in the U.K. and the Amazon.com page says it will be available February 21, 2017. Her first two books were highly engaging and lively, written with her distinctive perspective and style.

“Revolutionary Ride is my third book, about my travels in Iran.

In 2013 relations between Iran and the UK were at an all-time low but a mysterious note left on my motorcycle from a stranger named Habib inspired me to venture into the Islamic Republic. It was a bid to find out the truth about a country that had been cut off from the world for most of my lifetime. My journey was a mind-opening, sometimes shocking, often entertaining, and endlessly surprising experience that forced me to change my outlook about Iran, the Islamic world and to ultimately confront my own preconceptions.” 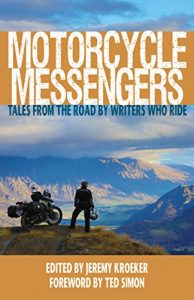 Motorcycle Messengers: Tales from the Road by Writers Who Ride

“Motorcycle Messengers is a collection of travel stories from some of the leading writers in the genre . . . plus a few people you’ve never heard of. Consider it a sample pack of authors. Read a story by the fire and discover your new favourite motorcycle travel writer. 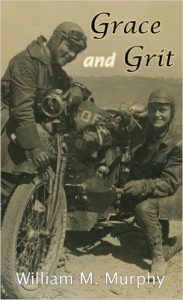 I discovered this book while researching an article I was writing about Adeline and Augusta Van Buren, who grace the cover. Last summer I was honored to participate in the Sisters Centennial Ride, celebrating 100 years since the gutsy sisters became the first women to ride their own motorcycle across the continental U.S.

These women were pioneers in many ways and paved the roads, metaphorically speaking, we enjoy today.

“Author Bill Murphy’s driving ambition and tireless research turns up the stories of five women from 1910 to 1916 who set out to pave the way for women adventurers. They packed their motorcycles with tents, tools and tenacity and charged ahead on cross country routes to make a point: that women were strong, capable and fearless. The roads were dirty and dusty, some merely cowpaths, and fuel was hard to find. Flat tires and broken chains were left to their own ingenuity and know-how to repair. And the weather ranged from rain for days to unrelenting desert sun. They endured. Here is the incredible story of daring young women in the Victorian era who chose the adventure of the ultimate road trip on two wheels.”

Tortillas to Totems: Motorcycling Mexico, the USA and Canada. Sidetracked by the Unexpected

Sam Manicom’s fourth book is a gripping rollercoaster of a two-wheeled journey which takes you riding across the dramatic landscapes of Mexico, the United States and Canada.
This enticing tale has more twists and turns than a Rocky Mountain pass and more surprises than anyone would expect in a lifetime.

There are canyons, cowboys, idyllic beaches, bears, mountains, Californian vineyards, gun-toting policemen with grudges, glaciers, exploding volcanoes, dodgy border crossings and some of the most stunning open roads that a traveller could ever wish to see. 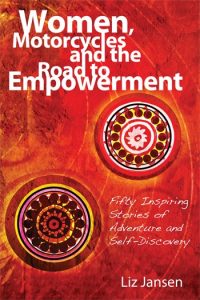 Women, Motorcycles and the Road to Empowerment: Fifty Inspirational Stories of Adventure and Self-Discovery

Because I had to include this one too! I’ll let this Amazon reader review speak for itself.
5.0 out of 5 starsThoroughly enjoyed the various stories

“This book expressed a lot of how I feel being a motorcycle rider. Liz does a great job of weaving her story in with the story of many women and their ride to confidence and strength. I’d highly recommend this book to all my friends even non-riders who are looking for some inspiration in their lives.”