Getting to the Starting Point 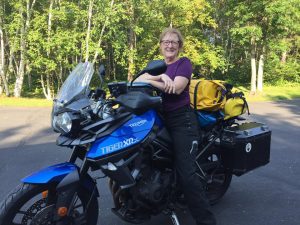 The day prior to departure, especially getting out of the driveway, is one of the most difficult parts of every motorcycle journey I take. This one was different in that the unease lasted longer and reached a crisis point. In fact, as I headed towards the ferry that would take me to Manitoulin Island on my way north and then west, I almost turned back.

Since the unexpected turn of events two years ago when I initially set out on this mission, I’ve worked on the art of surrender and being open to possibilities I may not have considered. I’ve tried to relinquish my inclination to control the outcome, especially when my intuition is trying to send another message. I had no idea of the residual fear imprint residing in my subconscious, not from the crash itself but from the lessons and insights that came out of the recovery time.

It was a crisis of confidence such as I’ve not experienced, but in my defense, it was not entirely without merit. I was afraid a nagging health condition had resurfaced and as it turned out, it was fear that was trying to get the upper hand.

But my mind was busy creating lots of noise. Was my body trying to tell me to stay home? Was I ignoring higher guidance and bulldozing ahead on my own agenda? I wasn’t ready the last time I set out. Was I ready now? What’s the right thing to do? My angst increased with each mile until finally, I stopped.

After deviating to a walk-in clinic, receiving treatment and reassurance from the doctor, and spending the night with friends, I was on my way again the next morning, feeling much better.

My intent is to lead with my heart  with input from my head, rather than the other way around. Of course, one can never be certain, just make the best choice at the time based on the best inputs, and move forward from there.

That’s what I’ve resolved to do, and stop second-guessing myself.

After riding across much of the country in the past four days, later today I officially start the ‘ancestral trail in Dalmeny, Saskatchewan. Here’s where my grandparents first landed in Canada and where my mother was born.

As I follow in their footsteps, it will be interesting to see what ‘ancestral imprints’ surface. By tracing their steps, I hope to discover how their behaviors, beliefs, and thoughts influenced me without me even being aware they were there.

My role is to stay in a state of surrender and curiosity, open to possibilities, and watch as the story unfolds.

Here’s the roadmap to date:

13 Comments on “Getting to the Starting Point”