lizjansen Posted on May 10, 2018 Posted in Adventure, Life Lessons from Motorcycles 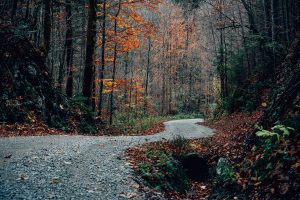 Growth comes through tests and challenges, and motorcycle rides inherently come with lessons. So I shouldn’t have been surprised when gravel roads showed up on a recent trip.

I love riding back roads in the Appalachians in spring! New growth that has germinated over the winter erupts in a profusion of green. Leaves burst from their buds, streams cascade over rocks along mountain roads, and new calves nurse and romp in green meadows. Rarely do the roads have shoulders, or guardrails. The riding is intimate and expansive. Exhilarating and rejuvenating.

Exactly what I was looking for after a winter of hibernation while I wrote Crash Landing.

Accessing the mountain home of my friend Penny and her husband presented the first challenge. It was my first visit there and her directions raised alerts:

A trip to our mountain house requires a warning. It gets very twisty – no guard rails and some very tight turns and of course just to make it more fun, gravel in spots. (This was the main paved road.) You’ll pass a parking area for hiking. About a mile later on the left you’ll be looking for a gravel road with a small green sign. Not too bad, I’ve had other motorcycles come visit. Come on up!

It looked manageable on Google maps, so when I arrived at the turnoff, I took a deep breath and headed up. I’ll ride gravel, to a point, but half way to the top I stopped. The road was getting twistier with deeper gravel, beyond my willingness to ride.

There’s always a solution, even if it involves swallowing your pride. Penny drove down and I followed her back to the road, to the gated back access to their home. It, too, was gravelly but had better traction. With a lot of muscle from both Penny and me, we stowed Trudy in the woods, locked her behind the gate, and returned to her mountaintop home for a lovely visit.

The next morning, I rode down to the road and continued on my way to join my friend Alisa Clickenger. Alisa’s the founder of Women’s Motorcycle Tours and was scouting her Awesome Appalachia tour happening later this month. True to its name, it’s full of twisties and awesome scenery.

Professional tour organizers like Alisa pre-run the ride to avoid the unexpected on the tour. Like the narrow paved road through the Jefferson State Forest that turned to a gravel forest access road.

Alisa stopped, knowing my aversion, to consult with me and check her bearings. She asked if I’d like to turn around, and I said as long as it didn’t get worse than what we were on, I was OK. Alisa’s an expert off-road rider so the gravel didn’t phase her, or another friend who was with us, in the least.

What we thought would be a mile of gravel turned into ten. We were on a ridge for a while, but it was the descent that pushed me to my limits. Two steep hairpin turns were beyond my scope, so Alisa deftly navigated Trudy through them, then I got back on and continued.

I heaved a HUGE sigh of relief once we got to the intersection with the paved road. Except for those two turns, I’d done ten miles of forest road. We’d only resumed pavement for a short distance and the gravel returned, but only for about half a mile, as if to remind me not to become complacent.

It’s humbling to ask for help. Twice, I’d had to rely on friends to bail me out. Neither of them minded in the least. To continue in situations I knew were beyond my scope carried greater risks than I was willing to gamble. For the sake of pride, I could put myself and others in peril. A crash in the middle of the forest would screw up everyone’s day.

We never know what life’s road has in store, even when we’ve got it all planned. That’s what friends, teams, and community are for. We each carry unique gifts to share with the world. Mine are different than Penny’s or Alisa’s. This time they helped me out of a bind. Next time I’ll help them, or someone else, in another way.

There’s no doubt I advocate stretching our comfort zone. That’s how we grow. Growth also includes the graces of respecting our limits, discerning between fear and intuition, and listening to our intuition.

Note: Women’s Motorcycle Tours Awesome Appalachia tour is an incredible opportunity for women riders with intermediate to advanced skills. The gravel forest road is NOT part of the tour.

Photo by Mohammad Saifullah on Unsplash