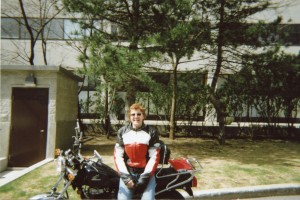 Wrestling with the controls on her vintage bike, Diane managed to send everyone off a main downtown Toronto street in a panic. She has since refined her technique and traveled the countryside without incident.

In 2005 I worked with an avid rider. He had a beautiful bike and extolled all the benefits of riding. At age forty-eight, I signed up for the next available course which unfortunately, was three months away.

What was your biggest challenge in learning to ride?

My challenges came after the training course. I found the 125cc bikes so similar to my mountain bike that on a rainy Day Two of the course, I was doing snake turns. But once on my own 450cc, four-hundred and thirty pound bike, the city streets were daunting to say the least. I dropped the bike a few times. The front brake lever sometimes seemed out of reach.

One day, I panicked everyone on Yonge Street (downtown Toronto main street). including myself.  With both brakes on full, I inadvertently twisted the throttle, causing the engine to rev so high it created a lot of noise and smoke and everyone fled.

There was also the process of finding out all the things that can go wrong on a vintage bike. Excess pressure on the back brake would send the back wheel swinging out, leaving me angular on Toronto streets. Luckily I have a brother that can fix anything and has. It was my third riding season before I went out for in the spring without being scared. Now I can practically get dressed on that bike.

The riding experience has been much, much better than I ever expected. It was also more difficult than I had originally thought. It’s not as easy to do as it looks.

I have put over forty-thousand kilometers (twenty-five thousand miles) on my bike in six years. My friend and I have done day trips to Tobermory and to Goderich via Owen Sound. In 2010 my friend and I rode to Sault Ste. Marie in a day (seven hundred kilometers/four-hundred and forty miles). The next day Janet headed west to Vancouver and I swung back through Michigan for a few days. I rented a Harley inMiami in 2008 and rode down to Key Largo.

My biggest ride was eleven days to the Canadian East Coast, down through New England, Vermont and New York. Last September I spent an amazing three days in Pennsylvania. Last summer I finally saw Pelee Island in Lake Erie. My next destination is Savannah,Georgia, through the Tail of the Dragon.

I love to see women riders looking so confident on their bikes. I am in awe of each one of them. I watched my twenty-six year old daughter riding back from her first trip (on my bike) travelling down the highway, turning with a beautiful angle as if she had done it all her life,

The bike allows me to travel like I never have before. Being independent and off the beaten path is an absolute thrill for me. There is a leisurely pace in riding and you get to see so much more of the landscape. Being one of a select minority is great. I love filling the tank for thirteen dollars and riding two-hundred and fifty kilometers (one-hundred and sixty miles).

As a beginner I was limited to short rides. I did find groups and a friend that helped me get to destinations further afield. Four times I have had bees in my helmet. I was not always prepared for the changes in temperature and have to say I still get caught out in the elements now and then.

You can read more about Diane and her experiences on her personal blog.