lizjansen Posted on March 20, 2015 Posted in Travel No Comments Tagged with , touringtravel 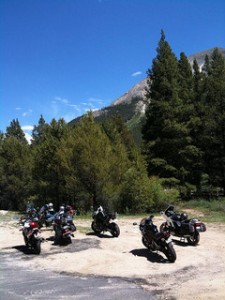 by Liz Jansen
With the arrival of spring comes thoughts of riding—lots of riding. Many Canadian and American motorcyclists dream of riding right across their country. Even if you live in warmer climates, it’s usually not feasible,  practical, or safe to be doing this during the first few months of the calendar year. But it’s a perfect time for planning that ride.
I’ve gathered a collection of tips from the experts that offer everything you need to know to have a fantastic and safe adventure. Even if you’re not crossing the country this year, these tips will get you ready for your best season of riding yet!
Tracy Staedter on Discovery
How to Really Drive Across the US Hitting Major Landmarks

“Last week, I saw a map going around Facebook claiming to be a car route across the United States that hit all of the country’s major landmarks. I thought, Hey, neat. But when I looked more closely, I saw quite a few states obviously missing, and I when I did a quick search on Snopes.com, I found that in fact the map was of a route taken in 2001 by photographer Brian DeFrees, who wasn’t driving to every major landmark in every state.

But wouldn’t it be nice to have a map that hit landmarks in every state and not only that, wouldn’t it be great if the map represented the optimal, most efficient route across the country?”
Jim McDermott on Motorcycle.com
50 Tips for Riding a Motorcycle Across America
“Riding across America is the dream of many motorcyclists. The notion of traversing the U.S.A. on two wheels has a certain romantic aspect; 4000 miles unspooling before you like reels of an old, epic film. A lone rider and his/her machine, dusty and stoic, sharing tales of the road with strangers at every stop but never lingering in one place for more than a meal or a night’s sleep.”
American Motorcyclist Association
33 Secrets for Smart Touring

It can take years to develop that knowledge through trial and error. So we’ve devised a shortcut. We’ve asked AMA staff members to share with you the experience they’ve accumulated over decades on the road.

What you’ll find here isn’t a comprehensive collection of touring knowledge. Instead, here are 33 insider tips—useful suggestions that have made our tours more organized and more fun. We guarantee you’ll learn something.”

Jim Parks on RoadRUNNER
Touring Tip: Riding Cross-Country
“An enduring dream of many touring motorcyclists is to ride their mount all the way from one coast to the other, or ride between the Canadian and Mexican borders, or at least to venture across many state lines on an extended excursion. Obviously, riding thousands of miles across plains and mountains through varying temperatures and changing weather patterns, spending many days and hours in the saddle, and navigating unfamiliar territory is not your typical Saturday morning breakfast ride or even a multi-day tour over a long weekend—riding cross country may be a whole different ballgame from your previous riding experiences.”
Gary McKechnie on Rand McNally Blog
10 Tips for Planning Motorcycle Trips

“At a service station in Kanab, Utah, I met a group of riders that seemed just like most groups. There were dressed in sleeveless T-shirts, bandanas, and jeans, and they were doing what many American motorcyclists, myself included, do all the time—ride across the country. The twist was that these riders were from France.

Like most motorcyclists, these French riders were independent spirits. But they were also wise enough not to confuse independence with indifference. They understood that heading out without a good touring plan could result in groaning across hundreds of miles anesthetizing asphalt. With a plan, they knew they’d experience the trip of a lifetime and create great motorcycling memories. Here are some tips to help you do the same.”