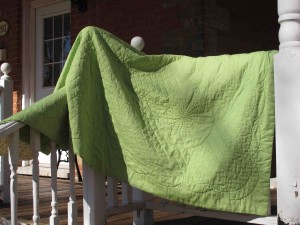 It’s close to 40 years ago that Oma gifted me with a finely hand-stitched quilt. Lime green on one side, tiny orange and pink flowers against a white background on the other, I didn’t know what I was going to do with it. My grandmother’s quilt matched nothing in my home. Now I don’t know what I’d do without it.

Few women I’ve known can match Oma’s resilience or resolute strength of character. Surviving a twin birth which killed her mother, she knew innate courage and unwavering values. At age 26, she was a penniless refugee, steaming across the North Atlantic on the SS Minnedosa with her husband, having left her homeland days after burying their first baby. Heartsick and seasick, she spent the voyage below deck, crying and heaving as the seas roiled and heaved around her.

After many tough years of menial labor to get established in a strange new land, my grandparents settled on a grape farm near Beamsville, Ontario. The large red brick house, which is still in the family, was the scene of many wonderful childhood memories. Even the outhouses.

Worship was very important to my grandparents and they were stalwart members of the Mennonite church in nearby Vineland. Aside from Sunday services and midweek meetings, a core group of women would get together once a week to quilt. For decades, Oma packed her lunch and walked the 7 km/4.5 miles each way to spend the day with friends, creating bedding that provided warmth and comfort to the less fortunate.

Everyone had their specialty and there’d be many quilts in production at the same time. Some women were expert “pinners”, others coordinated colors, pieced the patterns together and sewed them into squares, while a few were fine stitchers.

Most of the quilts were best described as utilitarian; with tops pieced together from donated scraps and clothing that had outlived its usefulness. At times there were cupboards full of tops waiting to be matched up to a solid-colored bottom which had to be purchased. Once finished, they were donated to the Mennonite Central Committee (MCC) and could make their way to a refugee camp anywhere in the world.

To raise the funds needed to purchase bottom fabrics, the women made “fancy” quilts on consignment. These were done in plain colors with intricate patterns stitched into them. From time to time, they’d make one that someone in the group would win in a draw. That’s how I got mine. Oma won the lime green quilt and passed it along to me.

One of the things with a broken shoulder, is that it’s quite painful to lie flat in bed. The only way to get relief and some semblance of sleep is to spend the night in a recliner, bolstered by strategically positioned pillows. It’s times like this that the green quilt comes out. She’s with me in the small hours of the night when sleep won’t come. I think of the life she lived, how she lived it and what she’s passed on to me, the rest of her family—anyone who knew her, and many who didn’t. I think of the camaraderie which held those women together, often during trying times. That energy is in the thousands of tiny stitches and can’t be laundered out.

Oma was not one to speak her feelings, yet I know she gave me that quilt out of deep love. She, who rode a motorcycle when she was young but never drove a car, had no idea the quilt would encourage and inspire her granddaughter while she recovered from a motorcycle accident many years later. She probably thought it was merely a beautiful piece of bedding for warmth on cold nights.

Little did she know that a grandmother’s quilt went far beyond the physical warmth it provides. It grounds me, puts things in perspective and touches my spirit every time I use it. There’s no more precious a gift than that. Thank you Oma. I love you.

12 Comments on “A Grandmother’s Quilt”