lizjansen Posted on August 25, 2014 Posted in Adventure No Comments

Set on a picturesque lake in the majestic Canadian Rockies, it’s easy to understand why this year’s Horizons Unlimited travelers meeting in Nakusp, British Columbia,, attracted a record number of attendees. While the event primarily draws riders from British Columbia, Alberta and Washington, there were people there from all over the world. They come from all walks of life, all ages and all cultures. They share not only an adventurous spirit, but are out there living their dreams.

Meet some of them, starting with my next-door neighbors who kindly boiled water for tea every morning. 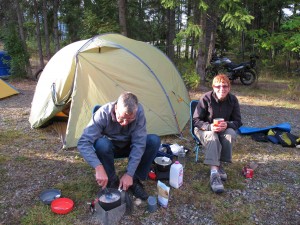 Steve and Janette Douglas started their round-the-world (RTW) trip on June 18 and plan to be away, “for as long as it takes.” After meeting up with their 800cc Triumph Tiger XC in Alaska, they rode in Alaska before heading south into British Columbia. They expect to spend two years in the Americas and then head t Australia or New Zealand.

A Technical Sales Manager, Steve, age 51, had been with Microsoft for 18 years. Janette (48) had worked in Management Information Systems and Database Management for Axa Insurance for 30 years. Both quit their jobs to do this trip. Although they’ve traveled by motorcycle, this is the biggest adventure travel they’ve done together.

Their favorite part of travel is the people they’re meeting along the way, with a special appreciation for the camaraderie they experience with motorcyclists from all over the world. The most difficult part has been the Dalton Highway, because of the slick mud caused by extended rains.

When asked what they would do differently, it would be to start exploring the world sooner, and slow down sooner. They’d also start preparing sooner and try and avoid the last minute crunch. This is not a holiday, they don’t have to rush, and they want to savor the landscapes they’re traveling through. Follow them here: www.tiger800rtw.com.

Steffan Troeger, age 31, took a leave from his family’s water well-drilling business and rode his BMW 1150 GS in from Guatemala. After reaching Prudhoe Bay, he’d blown a wheel bearing in Whitehorse, and had to wait five days to get his bike shipped to Edmonton for servicing. The two travel mates he’d been with had gone ahead and he was meeting up with them again in Vancouver.

He’s on the road until at least the end of November, and planning to attend BMW’s convention in Copper Canyon, Mexico on his way home.

Steffan’s favorite part of Canada has been the amazing wildlife and the nice people, especially in small, remote towns. He also gave me great advice—and reassurance—on traveling through Guatemala. 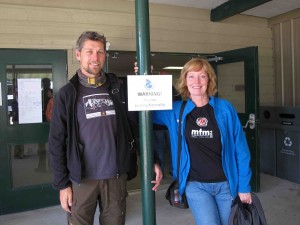 Swedes Petra and Anders Stridefeldt, both 50 are in the middle of their RTW trip. Parents to three grown sons, they live in England and have been on the road 15 months—she on a white, lowered BMW F800GS and he on a black F800GS.

It’s not hard to recall their most difficult day on the road. They arrived in India for the hottest summer in 50 years, with temperatures in the 50’s C. Anders was sick from food poisoning, they’d run out of drinking water, they’d ended up on a freeway where motorcycles are not allowed and the traffic was horrendous. They point out that help always arrives when you need it. They both survived and went on to enjoy their favorite experience – riding up and down an ocean beach in the surf.

Petra puts their journey in perspective. As difficult as their days may get, it’s not difficult to travel around the world. Most of the people in it don’t even have a choice about what—or if—they can eat that day. They can just pick up and fly home if they want.

Neither knows much about bike maintenance and they prefer to see what the road serves up, rather than over planning. To learn more about them and follow their adventures, check out their website: www.twobikersoneworld.com. 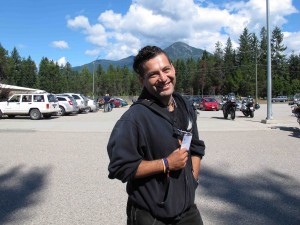 Twenty-eight year old Antonio Romero has just graduated from his Masters in Sociology and is waiting for his thesis to be approved. He rode his single cylinder Yamaha 660 Tenere up from Mexico to spend two months working on the farms in the Okanagan. With Nakusp in easy riding range, he managed to get away for a few days to meet with fellow adventurers.

No stranger to adventure, Antonio’s ridden a Honda 125cc from Mexico to Brazil, and has also moto-traveled through Central Mexico, Colombia, and Venezuela.

So you see, anyone can do it if you want. In fact, you can realize your dream no matter what it is. Those who are doing it say it’s a matter of prioritizing and then taking the first step. The rest is easy.