lizjansen Posted on November 3, 2012 Posted in Leadership Tagged with legacy

This weekend I’m at the Delta Centre Ville Montreal with friends and colleagues from across Canada, celebrating the Seventh Annual Canadian Motorcycle Hall of Fame Induction Banquet and Reunion. The first for Montreal, the Saturday evening event caps off two days of meetings, including the Annual General Meeting of the Motorcyclists Confederation of Canada (MCC). MCC, the Canadian motorcycle advocacy organization, is a major sponsor of this notable event. 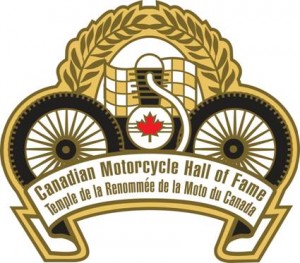 Motorcycling legends and champions being inducted represent an accomplished group of men and women who have achieved excellence in one or more competitive disciplines or made a significant contribution to the well-being, advancement or general positive image of motorcycling in Canada.

The Canadian Motorcycle Hall of Fame is the annual signature event of the Canadian International Motorcycle Heritage Museum Foundation, a non-profit association with charitable status. It is governed by an independent board of volunteer directors located from coast to coast and is sponsored in part by the Motorcyclists Confederation of Canada (MCC).

Founded by Bar and Hedy Hodgson in 1999, the Canadian International Motorcycle Heritage Museum Foundation preserves and promotes Canadian motorcycle history for the benefit of the motorcycling community and public. Since the first induction banquet in Toronto in 2006, 74 distinguished motorcyclists have been inducted into the Canadian Motorcycle Hall of Fame.

As an MCC Director for the past seven years, it’s been an honour, not only to attend all of these banquets, but to be involved with an organization so dedicated to serving motorcyclists and protecting their rights.

Contact me at liz@lizjansen.com if you too would like to get involved. There are lots of opportunities to make use of your unique skills and riding interests.