A Ride into Motorcycle History

Surrounded by a world of motorcycle history, nothing else existed once my eyes found the Honda Cub. It’s how I got my start into motorcycling more than forty years ago. Little did I know at the time that motorcycling would be inextricably linked to my own personal Road; my mode of transformation. 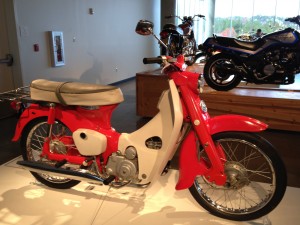 I was on a late-season motorcycle road trip and had stopped at the Barber Vintage Motorsports Museum in Birmingham, Alabama. The largest collection of its kind in the world, approximately 600 of a collection of 1,200 vintage and modern motorcycles are on display at any one time.

The energy from men, women and their motorcycles is palpable. Each one of those bikes has stories to tell about the people they’ve carried, the experiences they’ve shared and the adventures they’ve been on.

As my advent into motorcycling, I had nothing to calibrate against and that little Honda might as well have been a big street machine. My younger brothers John and Robert each paid $45 from their wages to purchase it for fun on the family farm. While they both rode it, their relationship was such that John did a lot of the riding and Robert, who would become a millwright, fixed it. Looking back, I’m not sure how I scavenged time on it, but I managed enough to spark a lifelong relationship with motorcycles. It wouldn’t have taken much.

They were small: 140 pounds and 49 cc’s producing 4.5 hp at 9,500 rpm; 3-speed transmission with an automatic clutch, electric start and a top speed of 45 mph. They were inexpensive, reliable and required little maintenance and are still being built in third-world countries. At last count, over 27 million have been produced, making them the bike that has introduced more people to riding than any other.

Between the original owner and the Jansen clan, that bike introduced at least 5 people to riding, and it’s only 1 of 27 million. Ironically, although bikes continued to be part of the farm scenery, neither John nor Robert pursued (legally) riding on the road.

My own Road has had many twists and turns, a few potholes, but mostly beautiful roads and scenery since that life-changing meeting all those years ago. From that point on, a motorcycle was always there, waiting to take me to where I needed to go, physically or spiritually.

As I basked in the memories, it did not escape me that I am but one of many millions whose life has been enriched through motorcycling. That Honda may have only had 4.5 hp, but it’s energy has changed lives around the world.

I’d love to hear which bike got you started and what it’s meant to you.  Submit your memories in the comments below.  Thank you.

10 Comments on “A Ride into Motorcycle History”