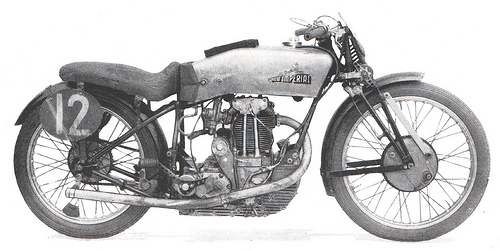 Motorcycle Art, Photography, Gasoline Additives, Taking a Hit and Fun on Small cruisers are the chosen posts for this week’s Motorcycle News You Can Use.

Photographing Motorcycles Parked in Front of Places captures turning points, in roads and life through creative photography. Artwork of Your Dreams is creative in other ways, using motorcycles and even coffee stains to create innovative messages.

Gasoline 101 helps decipher all the talk around fuel additives—a topic important to the well-being of your bike.

It hurts to get hit—and not just physically. The impact pervades well beyond the initial event. Learn how to handle it if it happens.

Lastly, how big is enough? Many times, a small bike can do everything it’s bigger brother can do, and it’s easier to manage, insure, and pay for.

“We hear a lot about how it’s the ride, not the destination. Okay, understood. But, since you need a place to turn around, the destination has to figure in there, right? Not that you have to actually know where it is when you set out, but when you get there and say okay, time to turn around, that was it. Destination Point. The place to which you were going, whether you knew it or not. So you take a picture.

Of course you also take photos along the way, but the turnabout is key. The turning point, the middle of the story, the place that offers rest and good food. Which is followed by the new perspective, and even point of view, of heading back home.”

“On any given day, Americans burn through some 368 million gallons of gasoline. We have a serious appetite for the stuff, but besides fussing over its price, how much thought do you give to gasoline? When so much pride and concern is fixed to your bike’s performance, how much do you know about the flammable liquid that makes it all happen?

Strap in, kiddos, because in this issue and the next you’re going to get a crash course on gasoline.”

Ingredients For Life: Coffee And Motorcycles Together In The Artwork Of Your Dreams

“Coffee and motorcycles: You need these things for life; artist and illustrator Carter Asmann needs these things for art. (Which, to be fair, is also life, but I’m not trying to blow your mind at 8 in the morning.) Twin coffee-cup rings form the wheels in Asmann’s brilliantly detailed series of motorbike masterpieces, and one look at his creations will convince you that no couple is hotter than graphite and caffeine.”

Somebody Hit Me a Month After Buying My First Motorcycle

“It only took one month for my friends and family to be able to say to me, “told you so.” I sat in the middle of the street in West Hollywood watching as gasoline spewed out of the punctured gas tank. I looked at the bike, lying on its side, as people started to step out of their cars to see if I was okay. All I could feel was anger.

I wasn’t concerned with any injuries, I wasn’t extremely worried about the state of the motorcycle, and the animosity wasn’t even aimed at the person who’d just hit me. I was mad that my two wheels were now out of commission. I was pissed that I became another cliche. Most of all, I was furious that, after years of yearning to own a motorcycle, I only had about two weeks of true riding (I’ll explain that later) before everybody close to me now had even more fodder to protest my continued riding.”

“Small-displacement cruisers sometimes get the short end of the stick. They’re too often labeled as beginner motorcycles, which can be a fate worse than death in the size-conscious cruiser market. When they hear you’re on the hunt for a smaller-proportioned, lightweight machine, well-meaning friends will often steer you toward the “entry-level” end of the spectrum, where the bikes are built to a strict price, and, well, they often show it. At that zip code, your options used to involve just air-cooled, single-cylinder, carbureted engines, chain drive, a five-speed gearbox, and drum brakes.

But what if you have some riding experience and a hankering for more than just a cheap quarter-liter machine that can barely outrun its own shadow? Maybe you want something that actually looks, feels, and works like a substantial motorcycle rather than a child’s toy but want to pay less than $9,000. Fortunately, your midsize cruiser choices these days are way more plentiful and a lot more diverse.”

I’d love to hear from you. What were your favorite articles of the week? Follow me on Facebook or Twitter where I help you see that by mastering motorcycling, you can master anything!