Parting Words From a Friend

Terry returned to spirit form on October 15, 2015, two months after his diagnosis. Those of us who knew him are better off for having shared a portion of our earthly journey with him. We feel profound loss and sadness, yet the same time, there’s love and gratitude for a life well-lived. Ride in Peace my friend. You are missed Terry.

Last week I visited a friend and mostly listened. Soon he will leave this physical plane and there were many words wanting to be heard.

Terry is my friend and colleague in the motorcycle training program at Humber College. In April at age 56, he retired from the Toronto Transit Commission, full of dreams and health. Although he taught a lot in spring and early summer, we didn’t get an opportunity to teach together this season as I was healing from a fractured ankle.

Animated, he described this year’s friends’ May dragon-slaying ride to Deal’s Gap, twisting, cavorting, and advancing on their motorcycles as the dragon flicked his tail. They were the victors, returning with tall tales and indelible memories. 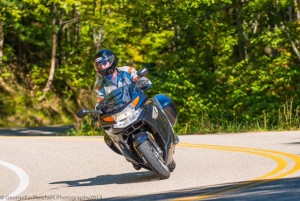 In late July, he returned to the Mennonite enclave of Steinbach, Manitoba where his father grew up. Terry and I shared a start in life in a similar heritage, and later the transition away from it. Unfortunately, the hope of seeing an ill relative before she passed, meant a plane ticket instead of a 4,000km/3,200 mile loop around Lake Superior on his motorcycle.

My stomach barely stayed with me as in great detail, he described the ‘ride of a lifetime’ in his cousin Mike’s stunt plane. “There’s nothing like a hammerhead stall and rolling out inverted at +3G force,” he exclaimed.

A persistent, gnawing pain in his right side sent him to the doctor in August. Terry was diagnosed with Cholangiocarcinoma, a rare form of bile duct/liver cancer. Inoperable. Untreatable. Aggressive.

We sat outside facing the backyard, his pride and joy, the result of years of painstaking planning and care. The lush garden he’d created around the stream and waterfall feeding the koi pond offered serenity and an oasis for the soul, sealing off external interference. 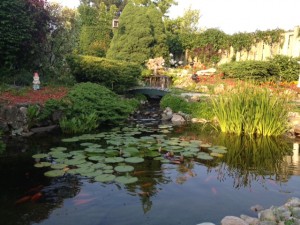 I sat there in my riding gear and listened to the words of a man who knows he’s dying and is ready ‘when the call comes’.

He loved teaching students to ride motorcycles, and he was very good at it. But what touched him most were the stories, especially from the women, about why they were learning to ride—because someone had told them they couldn’t, or they had survived an abusive relationship and were rebuilding their confidence, or they were pushing their comfort zone to see what they could do.

To aid in the transformation that comes with learning to ride was deeply fulfilling for Terry.

He’s actively and directly changed the course of lives in other ways.

Terry’s lifetime love of dogs led him to serve with the St. John Ambulance Provincial Therapy Dog Program. Joining in 1995 with his first Therapy Dog Jenny, he was trained by program founders Jim and Doreen Newel. Between 2002 and 2007, with Lucas as his Canine Partner, Terry served as Provincial Coordinator, traveling across Ontario assisting local Coordinators establish programs in their communities. These front line volunteers would take their dogs to any facility where the love of a dog could be used to comfort the elderly, sick children, or those with learning disabilities. 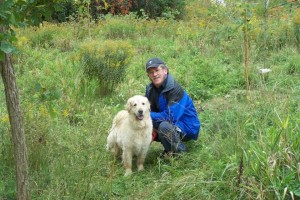 Terry talked about the value of the Restorative Justice (RJ) Program he volunteered in for years. An alternative to the court system for young offenders, the RJ volunteer, investigating officer, offender and a family member or support person work through a methodical process together. The results are dramatic for everyone involved. And they’re sustainable, changing individuals, families, and neighborhoods. Last fall he helped train another 20 volunteers to fill the growing need in his community.

He didn’t pick this disease or foresee his life evolving like this, cutting short the plans he and his wife Sherry had for retirement. Yet he accepts it. “I’ve done a lot and I’m thankful for that. I don’t regret what I didn’t have.”

Since learning to ride as a teenager, he’s put a lot of miles on his bike touring the Pacific coast, the southwest, and numerous trips to Deal’s Gap and area. The best trip was last year, when to his surprise and delight Sherry joined him for the first time.

Frightening experiences in her youth had turned her away from motorcycles, but she was ready to try again with Terry. She flew to Halifax to meet him for a wonderful 10-day trip around Nova Scotia, Cape Breton, Prince Edward Island, and New Brunswick. Both are grateful they got this time together. 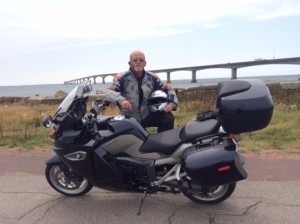 Now they’re sharing another journey, a section of road they had no intention of visiting for many years—one that revolves around care, hospice, and how Sherry will continue after Terry’s gone. Like what to do with his motorcycle. Bikes have been an important part of his life and he wants as many of them at his service as possible.

Sherry supported an unsteady Terry while we walked out to my bike, although he insisted on bending over to pick up and hand me the side stand puck I’d forgotten to retrieve before I got on.

Contrary to his weakening physical health Terry’s strength is absolutely amazing. To have an evening with him, hear his wisdom, and share memories was an incredible gift.

Thank you Terry. Godspeed, my friend.

On September 20, 2015, a group of Humber College Motorcycle Instructors paid a surprise visit to Terry at his home (with full approval from Sherry). John Kerns put together this lovely remembrance of that day, a day of celebrating close friendship and a life well lived.

32 Comments on “Parting Words From a Friend”