On the Road in Oregon 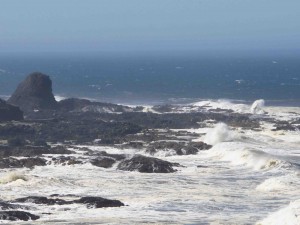 The terrain in the part of Washington State I went through to reach Oregon was a stark contrast to lush Montana! I was surprised at the flatness – and dryness. It’s not even ranch country – just a lot of scrub brush. This photo is on Highway 14, on the  north side of the Columbia River Gorge, a far better option than taking the Interstate on the Oregon side. I did that 10 years ago, and was happy this year to be on a road where I barely saw another vehicle for 10 miles, and could look across the river and see all the traffic on the I-84, happy I wasn’t there. 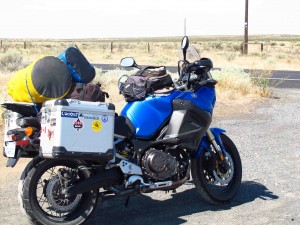 The Columbia River – here wide, lazy and very blue. Later downstream, it becomes the wind-surfing Capital of the world – for good reason! The wind really whistles up that gorge! 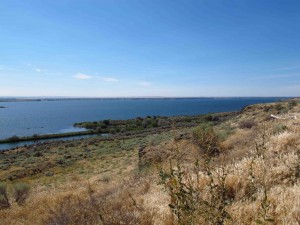 My first Oregon destination was the Trask County Forest after accepting an invitation to Dual-Sport riders participating in the Rat Dog Rally.  Here are Rob and Linnea – ready to go off-riding again on Sunday while I hit the road. Linnea’s only been riding a little over a year and has amazing skill on her F650GS. 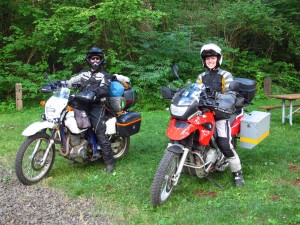 If the Pacific Coast Highway isn’t hugging the shore, it’s tunneling through stands of cedar and pine, with trees forming tall sentries on either side of the road. 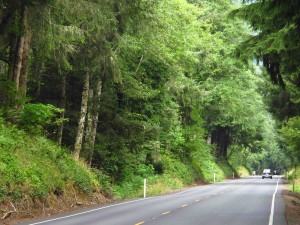 There are lots of breathtaking scenes just like this one, just south of Cannon Beach. 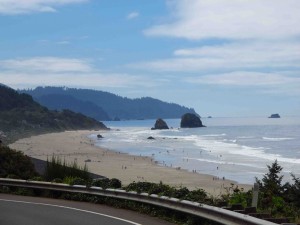 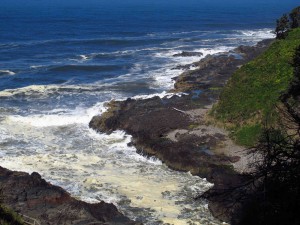 A short walk takes you right out on the rocks.  Signs warning you of the dangers of rocks, logs in the surf and  sleeper waves which sweep you out to see, are plentiful. 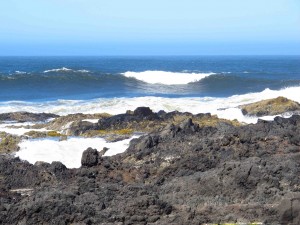 You’re always changing elevation, often rapidly. Behind me, the road is almost at sea level. 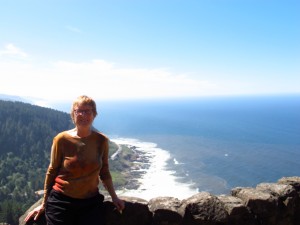 Another view from one of the plentiful turn-offs. 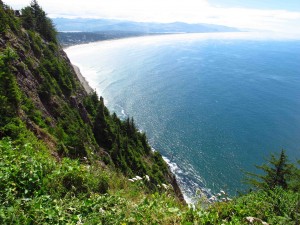 Nature’s Corner Cafe in Reedsport where I had the best restaurant meal of the trip – so far. Healthy and delicious! It was also where my bike tipped over in the parking lot as I was leaving. Having had to visit the ER the evening before, I still wasn’t feeling top notch and was tired to boot. A poorly executed stop when a car turned unexpectedly in front of me had the bike over. Before I could even get it unloaded, a couple had stopped to help, it was righted without a mark, and we were back on the road. 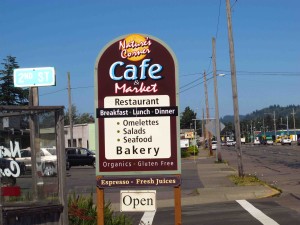 This was the absolute best campground. I loved it here – and was what I’d pictured they’d all look like. Too bad I could only spend one night, but just being surrounded by those giant trees, breathing in the abundant oxygen they created was therapeutic and restful. I’ll go back there. 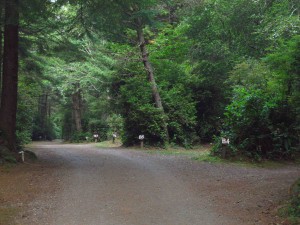 Of course it wouldn’t be the Oregon coast without some fog. This was the sight the morning I left. The temperature was in the mid 50’s. By the time I got a few miles inland, it had climbed to the high 80’s! 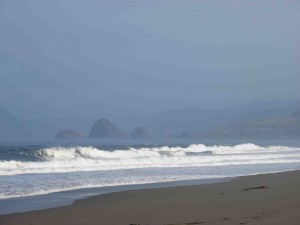 Approximately 1,000 miles through Washington State, Oregon, a bit of California and back up into Oregon. Next stop – Carson City/Lake Tahoe! 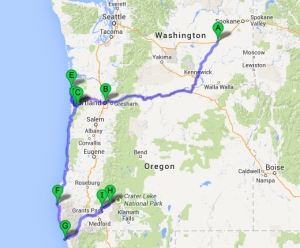