Opening a Message in a Bottle — Or Parking Lot 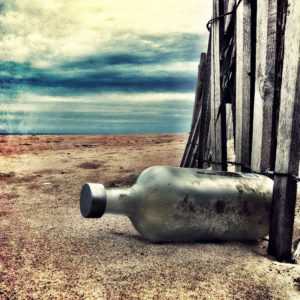 He stood in the distance, against the curb behind his parked vintage motorcycle, beckoning, a helmet under his right arm.

I noticed him from the middle of the parking lot, where I stood with my co-instructor, Mike. Our vantage point allowed us to keep an eye on the students we’d taught to ride that day.  At the end of the first day of training, they were buzzing around the lot, exploring their fledgling freedom, but not yet road-ready.

He was insistent. We motioned for him to walk over, along a safe edge of the lot where he wouldn’t be a target for the new riders.  He strode over with purpose, animated. As he neared, it was obvious he’d come to see me. From fifty feet away, he extended his arm, pointing and exclaiming, “You saved my life! You saved my life!”

I had no idea who he was, what he was talking about, or how he knew I was working that day.

“Last year I was in your class. You taught us how to ride in curves, and what to do when the unexpected happens. A truck came over the centerline while I was in a curve, and I remembered your words. They saved my life and I’ve come to thank you!” He shook my hand, turned, walked back to his motorcycle, and rode off.

Mike and I were speechless. He was in tears. There was no doubt we’d just shared an extraordinary moment.

Although that incident happened a decade ago, it remains fresh in my mind. The stranger was one of hundreds I’d taught at Humber College that season, and the lessons were the same for all of them.

While we never know how our messages are perceived, a stranger had shown me how a few words or an act of kindness can change, even save someone’s life. I’d never have known had he not told me.

It’s like putting a message in a bottle. You toss the bottle into the ocean and you have no idea where it’s going to end up, who will read it, or what it will mean to them. You’re not attached to the outcome, but every once in a while, if you’re lucky, you’ll get a message back. You are making a difference.

Photo credit: jenni from the block on Visual Hunt / CC BY