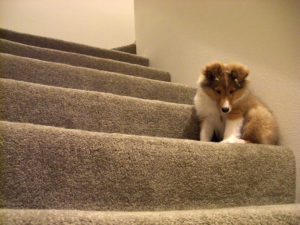 I did it on a whim. In late May, the Lion’s Den Yoga Studio, where I practice, posted a 30-day yoga challenge: 30 days of yoga in June. They relaxed the start date so the challenge could start any time in early June (I started on the third), and agreed to accept 30 classes in 30 days. We could do them at any studio, or even home, although I prefer the structure of an organized class.

The only prize, other than a more toned, flexible, and stronger body is the self-satisfaction of having achieved a stretch goal. Ever since returning to yoga in mid-November, I’ve been taking four or five classes a week, attending late-afternoon or evening so it doesn’t interfere with my workday. How hard could it be to do seven?

Much, it turns out. Especially for four weeks in a row.

Thirty classes in thirty days can become onerous. But I signed up and backing down from a challenge has never been an option.

The past week has tested my resolve. Work, family, and social priorities took precedence over yoga and I missed two days, expected to miss yesterday, and can’t attend this Saturday. I’d planned for those and banked three classes by doing doubles. Then yesterday, two unexpected events arose that need my attention next week. That means I’ll miss two more days, besides another day I’d already planned for. I’m running out of time to make up classes.

I could force myself to go and forgo other activities. But at what cost? Just to say I did 30 classes in 30 days? Choices are part of life’s greater challenge and may mean I don’t achieve my yoga goal. I’ll still attend four or five classes this week plus walk five miles most days.

Yesterday morning I woke up at 5:20 a.m. and knew I wouldn’t be able to get back to sleep. I could toss and turn for an hour, or I could get in an hour of yoga. Which is how I found myself on my yoga mat at 6:00 a.m. in a heated studio.

It turns out meeting the 30-day yoga challenge extends beyond the yoga studio.