Growing up around boys and motorcycles in rural Quebec was the ideal setting to ignite young Josee’s insatiable love of speed and adventure.  Now age forty-six and living in Ohio, she reflects on the motorcycle’s role during a lifetime of riding. 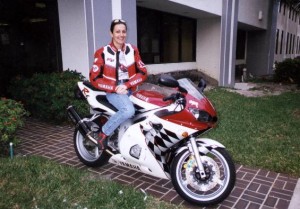 What prompted you to get into riding?

Raised around boys in rural Granby, about 45 minutes east of Montreal, I quickly developed a thirst for fast riding and tight curves. It is beautiful country with very cold and snowy winters and short summers. We were surrounded by corn fields where it seemed like there were no boundaries for us kids.

When I was six or seven, my brother taught me how to ride his mini-bike. My mom had the hardest time getting me to wear a helmet; every time she turned around, I’d have it off.

Later on, my brother got a dirt bike, and I’d anger him routinely by taking it out. Then he got a street bike and I borrowed that every time he left the house. As soon as the weather was warm enough, I’d ride a street bike to work. My first boyfriend had a bike and I rode that constantly!  We married, had a daughter and I stopped riding until she was seven.

I didn’t take a motorcycle skills course until I wanted to get my license in 1992. By then I was living in Florida and needed to know the rules of the States plus I had to get an official motorcycle endorsement. The course made a HUGE difference. I already knew how to ride but I learned I wasn’t very safe.

For many years, I frequently rode my daughter to school.  At  twenty-four, she’s not a rider and not that interested in becoming one. At least not yet. She’s had a few accidents in her cars and I’d be scared to death if she rode a bike.

I’ve ridden a Yamaha 950 V Twin for the past two years and most of my traveling has been on it. Occasionally, I will also ride my husband’s Yamaha Raider and the Yamaha R1 (since I sold my speed bike). I may buy a used Yamaha FZ1 to satisfy my thirst for tight curves. 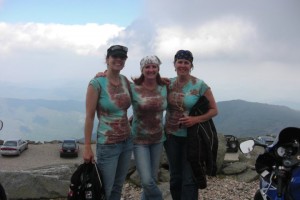 Motorcycle trips with my group of women friends are the best times, the best vacations I have ever had, even through challenging moments. I had no idea what I was in for while leading a group of women as we climbed Mount Washington in New Hampshire.

The danger from cars stopping in front of us on really steep hills and gravel was very real. One friend stopped and wouldn’t continue. I wasn’t scared of the road, the stops or the steep hills. It was the altitude. I could never enjoy the scenery because I felt dizzy when I tried to look out!  Yet it was my favorite trip.

How do you look back at yourself as a beginner now?

Riding feeds my need for freedom, fun, speed, sightseeing, friendship, relaxation…I could go on and on. Just the word “riding” makes me smile!  I’m now 46 and have 32 years of riding experience. I’ve had a lifetime of constant learning and have a thirst to learn even more.

The sport has given me so much. I now want to share my knowledge and the great pleasure of riding a motorcycle, so I’m planning on becoming a certified instructor this year. It seems like the right thing to do at this point of my life!