lizjansen Posted on May 10, 2013 Posted in Freedom Friday No Comments

With the spotlight on mothers this weekend, it seemed fitting to balance things a bit with some touching dad and daughter stories. I love to see the wonderful relationships male friends have with their daughters, and female friends with their fathers. 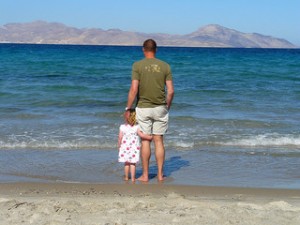 I credit my own dad, with my early entry into motorcycling. While I don’t remember him encouraging it, he certainly did nothing to stop it – and leaving that door open was all I needed to go through it.

Of course it could have been that he was so busy on the farm and feeding six kids that it was the least of his concerns.

These  stories will tug at your heartstrings as surely as they tugged on mine.

“When David Herron’s 17-year-old daughter couldn’t find the prom dress of her dreams, he did what any resourceful dad would do: He sat down and made her one from scratch.

A former military man, Herron had learned how to sew his stripes and hem his own uniforms. But making a prom dress? Totally new territory.”

A Now Open Letter to My Daughters

Never intended to be an open letter, this letter to two college-age daughters, was published in hopes that other parents will take the time to find the words to encourage their children.

One has to admire the leadership and compassion in these future fathers.

Fathers and daughters do the train as they dance to the Mambo during the 7th annual Military Father Daughter Dance at the Crowne Plaza Colorado Springs hotel, April 13, 2013.

Dads and daughters have special relationships. My dad just turned 87 and he’s still interested in helping me tend to my motorcycle, giving it prime real estate when I visit or offering what is now token muscle to loosen a bolt. I’m very grateful we’re still making memories. Thank you Dad.