lizjansen Posted on May 12, 2017 Posted in Liz's Stories 8 Comments

Mom and I went on our first motorcycle ride together on May 9, 2004. It was Mother’s Day and my 50th birthday. She was about to turn 78. So began an annual tradition that lasted for six years until she was no longer physically or mentally able to ride.

The dates don’t often line up like that, like they did on the day I came into the world. When the nurses brought me in for the first time, they’d tied a pink bow to a few strands of fiery red hair. That I’d be taking her for a motorcycle ride 50 years later would have seemed incredulous. With her can-do attitude, however, she wouldn’t have ruled it out—either that her daughter would be riding a motorcycle or she’d be on it.

In 2004, I was a year into my new life, post marriage and post corporate career. New life emerges in springtime, and like the season, I was full of energy, hope, and optimism. My parents were still on their Niagara fruit farm and the blossoms were in full bloom.

Our ride took us through countryside bursting with a profusion of pink and white petals and budding greenery as the orchards awoke from their winter hibernation. Mom’s bony knees dug into my hips and her hands clasped my jacket. I joked with her, reminding her that 50 years ago she was trying to push me out and now she was using her knees to hang on to me. 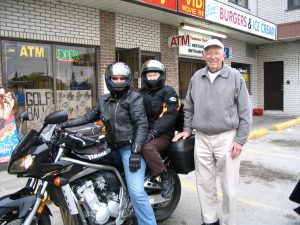 A few weeks before the next Mother’s Day, she asked if we’d be going for a ride again. And so an annual tradition was born. She loved to tell her friends about it. One year when we went a little further afield into Niagara-on-the-Lake, dad rode sweep in the car, just in case mom got tired. Of course, he drove alone the whole time. 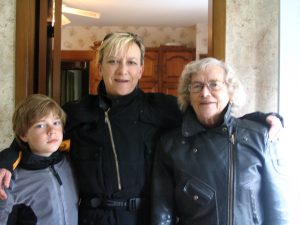 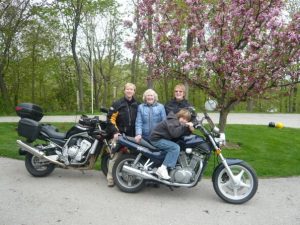 When my sister Mary got her license, she and her son Evan joined in for a couple of years. Mom loved it! She loved to wave at people she knew or anyone who caught her eye, wearing the smile of the motorcyclist proudly.

The Yamaha FZ1 I had at the time, got harder for her to get on, so I began carrying a step stool. It was like the old days when the stagecoach pulled up to the step so the passengers could disembark. 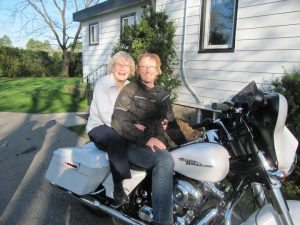 Then climbing aboard got too difficult and the dementia was robbing her mind. It was no longer safe to take her along. In 2012 we closed the tradition. Although she could no longer ride, she could pretend. With the Harley-Davidson Street Glide I had on loan, it was easy for her to get on and off. It didn’t matter that we didn’t actually go for a ride.

From the time I began riding at age 16, my parents were always accepting of my riding. That their daughter was riding a motorcycle just wasn’t an issue. There were important things to worry about, like running the farm. Now, no matter what time of year I go to visit, even if there’s a foot of snow on the ground, mom assumes I’ve ridden there. She knows nothing is impossible.

A year ago, her dementia progressed to the point we had to move her into long-term care. Her mind is failing, yet whenever I’m there, she asks about my motorcycle. When she introduces me to other residents, the motorcycle is always attached to the introduction.

Sunday I’ll ride down to see her. She’ll likely recognize me, although it may take a few minutes to remember if I’m her daughter, sister, or cousin. But when it registers who I am, she won’t forget to ask me about my motorcycle. Some traditions go on forever.