Paul (Trapper) Cane, CD, was born with a passion for motorcycles and serving his nation as a soldier. A life-altering accident in the line of duty, ended his military career, but brought together his passions in a way no one could have predicted. 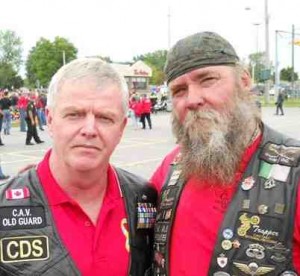 Trapper’s love of motorcycling sparked to life in the early 70’s when a friend offered him a ride on his motorcycle. His 23-year military career began later that decade as he served as an Infantryman and Regimental Sniper Sergeant for the Reconnaissance Platoon of the Princess Patricia’s Canadian Light Infantry and the Pathfinder Platoon of the Canadian Airborne Regiment. Deployed on NATO and UN missions in Europe and the Middle East, he rode at every opportunity, often against all odds.

The training, rigors and discipline, which made him a good soldier, also prepared him to survive a near fatal parachuting incident. Tangling up in a midair collision with another soldier who had blacked out, resulted in a near-fatal landing. Trapper’s spine was broken in three places, his teeth and right hip shattered, and he’d sustained significant internal injuries. Paralyzed, he was told he’d never walk again, but two years and 18 surgeries later, he shimmied from his bed to a wheelchair, and shortly thereafter, onto a motorcycle his friends brought to the hospital. With crutches bungeed onto the bike, he was off to Florida.

Motorcycles were his best therapy, and he soon recognized their benefit in rehabilitating other soldiers who had returned from service. Thus, with the help of a comrade, the CAV (Canadian Army Veterans) Motorcycle Unit was formed, to help integrate service men and women back into civilian life, to provide support for soldiers and their families and raise money for services not provided by the government. Easily recognizable, CAV members wear red shirts and a distinctive crest showing a military dispatch rider, poised for action.

Since then, he and his rig have made 14 coast-to-coast crossings of Canada, while attending hundreds of community events supporting Canada’s military and their families.

Two-time recipient of the International Community for the Relief of Starvation and Suffering (ICROSS) Humanitarian of the year awards, spearheading the national Highway of Heroes trans Canada Highway signage, and focusing millions of dollars to charitable needs are but a few of Trapper and the CAV’s accomplishments.

Reine Dawe (centre) was the physiotherapist who taught Trapper to walk after his accident. Here she and her husband Peter stand in front of the Portraits of Honour. Their son Capt. Mathew Dawe was killed by IED in Afghanistan July 4 2007. 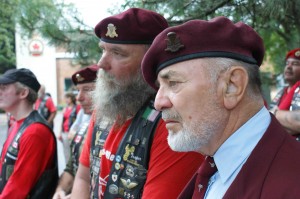 During a fundraiser for Toronto’s Tony Stacey Centre, listening to staff relate how CAV hearts support their efforts and allow soldiers and their families to live with dignity. Jan de Vries a WW2 Combat paratrooper Veteran who jumped with 1st Canadian Paratroopers on D-Day and the crossing of the Rhine.

Medric Cousineau and his Service Dog Thai, both CAV members. They walked from Halifax to Ottawa to raise awareness of the life saving success of Service Dogs for those struggling with PTSD. Medric won the Star of Courage on a Search and Rescue mission in the Atlantic. He still suffers although now supported by the incredible Thai. 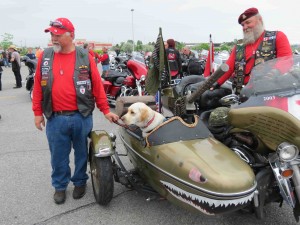 In Appeldoorn, Holland during the Dutch Commemoration of the 65th anniversary of the Liberation of Holland, Trapper rides a 1942 Ariel along the same route the Canadian Forces used to free Holland. The bike went ashore in 1944 on D-Day and was found in the Netherlands. 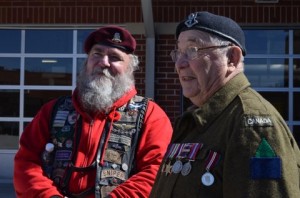 Harry Watts just days shy of his 90th Birthday in Trapper’s Green Phoenix‘s Sidecar in Prince Edward Island’s Atlanticade, leading the way for hundreds of riders across the Confederation Bridge. 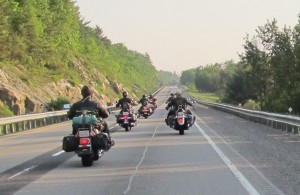 Trapper sums up his work and the mission of the CAV. “The Veterans and citizens of today may have the best freedoms of all—a powerful outreach energy while mounted on their beloved motorcycles.”