Remembering my Grandmother on Her Birthday

Four years ago I set out on a quest, seeking answers to who I was before my culture told me who I was. To help me understand my ancestors’ lives, I followed their migrations in Western Canada after they’d arrived as refugees. How have they informed me and shaped me into who I’ve become?

Today, I pay homage to my maternal grandmother, whose birthday was this week. 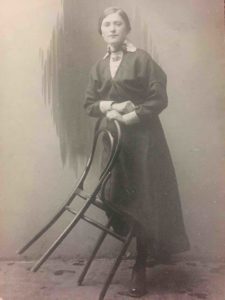 Susanna (Susa) and her twin sister Anna were born in 1898 to Heinrich Koop and Sarah Klassen in the village of Alexanderkrone in the Molochna (Mennonite) colony in southern Russia, now Ukraine. Five days later, their mother, age twenty-six, died. Everyone thought the babies would die, too, so they left Sarah’s grave open. Both babies lived into their late eighties, a harbinger of their strength, resilience, and determination.

Heinrich, a farmer, already had three daughters—ages six, four, and barely two. He couldn’t manage two more babies, even with his parents, who lived next door, taking care of their toddler. To help out, his late wife’s sister and her husband, the Enns, who lived near the middle of the village, offered to take one of the twins. The only condition was that whoever joined them would be considered part of their family. She could visit her father and sisters, but had to accept their home as hers. Heinrich was in a poor bargaining position. In the end, they sent one of their teenage sons with instructions to “pick one.” He picked Susa.

Already as a newborn, she’d lost her mother and was separated from her father, twin sister, and three more siblings.

The Enns were well off. Their sons were grown, and a baby girl in a houseful of boys was a novelty so they treated her like royalty. Russian servants looked after everyday housekeeping chores. She didn’t even have to do any dishes until she was eighteen, just before the Bolshevik Revolution erupted.

Susa flexed her independence and courage, before her marriage to Gerhard Reimer, in a move that was surprising for the times. Within their tight-knit colonies, Mennonites had divided into two distinct “strains,” KGs and MB’s, differentiated largely by their method of baptism. Susa had been raised and baptized as a KG. Gerhard was an MB. The MB church insisted Susa be re-baptized their way before getting married. She refused, stated her case, and they ceded. (Anna did the same thing.)

Less than a month before arriving in Canada in 1924, Susa and Gerhard had been parents to a beautiful little girl, whom they buried the day before emigrating. They were Soviet citizens, and lived in a large colony established 110 years earlier. They’d sung in a community choir. Seven years before that, Gerhard had qualified as a teacher and begun work. They laughed, played, and sang. They worshipped. State officials held the Mennonites in esteem for their economic prosperity.

Almost overnight they’d lost most material things and become peasants, having to beg for food at times. At one time, Susa and her brothers stashed their motorcycle in a false wall in their barn to hide it from the terrorists and soldiers. Gerhard had said two classes of people remained after the Revolution—poor and poorer. They’d pled with God to spare them and their country from one pestilence after another, including the human one. The only thing the terrorists couldn’t take were their souls, although they tried.

Mercifully, they were allowed to emigrate. As was the custom, Susa left with her husband’s family, not knowing if she’d see her father or siblings again. Fortunately they followed a few months later.

In Canada, they had their freedom, but life wasn’t easy and it took decades to get established. They’d zigzagged across a huge area—first to central Saskatchewan, then back to southern Manitoba, and then another 800 miles west to Alberta, doing what they had to do. When they had to forfeit their farm in 1931 after three years of weather-related crop-failure, they moved to Southwestern Ontario, just as materially poor as the day they’d arrived.

Life didn’t get easier, although by now, most of Susa’s family lived in the area. One day when the cupboards were bare, Susa didn’t know how they would feed their family supper. Unannounced, her uncle stopped by with a loaf of bread. That got them through until the next day when Susa would earn twenty-five cents at her housekeeping job and be able to buy three pounds of hamburger meat.

By the time I came along, they were living in Niagara, on a farm (still in the family) they’d bought when post-WWII credit was easy to get.

Susa was slight, fair, and willowy. She wore her waist-length medium brown hair in a Schups—a long braid, wrapped around the back of her head and kept in place with long hairpins. As the oldest grandchildren, my cousin Jude (Judy) and I, born two months apart to sisters, and more like sisters ourselves, reaped benefits, like overnight visits. We’d gape in awe when Susa let her hair loose to brush it and it would cascade down, almost to the floor. We had yet to learn about her life, and how her stories had shaped us. To us, she was Oma, and we adored her.

What favorite Grandmother stories do you have?  Tell us in the comments. Susa would love to hear them! 🙂

8 Comments on “Remembering my Grandmother on Her Birthday”