10 Things I Learned from Rhubarb Plants

Last week my sister Mary posted this picture and caption on Facebook. 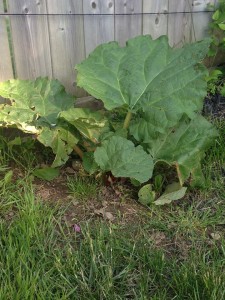 “I pirated this plant about 4 years ago..it was one of about 1000 or more that my dad could make grow 3 feet high..guess I just don’t have his touch. I still enjoy having it my back yard though.”

The plant obviously has a strong survival instinct, but it desperately needs nourishment. It’s all leaf, short-stalked, pale, and bug-infested. Curiosity prompted me to consult the expert for answers. What I learned in family history and life lessons went beyond my simple question.

Dad began farming rhubarb in 1965. Initially he had little more than an acre, grown primarily for root stock for forcing it indoors. (Rhubarb is propagated by dividing the root.) It meant a winter harvest and a source of revenue. It turned out to be hard work with little financial yield so he got out of it after 2-3 years, concentrating on his outdoor cash crop. Eventually the field grew to 15 acres producing 210 tons of rhubarb, all harvested by hand. Including mine.

These attributes which make a healthy rhubarb plant also create health and vitality for us:

Life lessons are all around us, often delivered from the most unusual sources—like rhubarb plants. Our task is to remain open to recognizing them, however they appear. And then responding.

2 Comments on “10 Things I Learned from Rhubarb Plants”