Legend has it that when the Creator made Manitoulin Island it was so beautiful, He called it home. First Nations peoples have lived and traveled through here for thousands of years. It’s such a special land, in the Ojibway language it’s referred to as Spirit Island. That in itself is a reason to plan a few days to truly experience and ride Manitoulin. 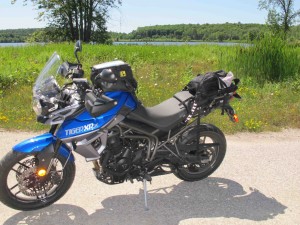 Geologically, its part of the Niagara Escarpment, formed from a process that began 400 million years ago. The escarpment begins at Niagara Falls, extending north to the Bruce Peninsula where it then drops under the waters of Georgian Bay, rising again to form Manitoulin Island before arching down the western shore of Lake Michigan.

This geography and location made it a very strategic important trading point on based on an ancient trade system. It was also a haven and a stop off point on the way to the west, not just for aboriginal people but also for people who came after.

Although I’ve vacationed there several times, I’ve crossed it even more. In July I was back to better understand, experience, and write about its spirit and culture. Read: Experience Spirit Island.

Here are 10 reasons why I’ll be back to ride Manitoulin:

Plan to visit Manitoulin as a destination. To skim across the surface is to deny your self a precious gift.