On the Road – Tahoe to Idaho

How do you beat a ride like this?  It’s typical of what I encountered yesterday in Idaho – amazing scenery that goes on and on, excellent roads and very little traffic. But I’m a little ahead of myself. 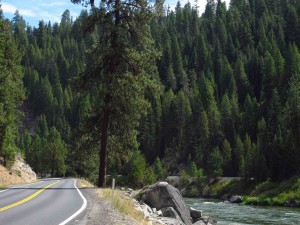 Leaving Lake Tahoe Tuesday took me west through Carson City and the Valley of Eagles. The smoke from the Yosemite fire was so dense, it set off air quality warnings. It was hard to distinguish the city, let alone see the surrounding mountains. By far the most tragic was the thought that the smoke, which blanketed the area in varying degrees for the entire time I was there, was the result of trees, plants and animals that had perished. 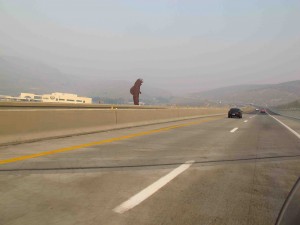 South Lake Tahoe where I stayed Sunday and Monday is in California.My route north took me back into Nevada before returning to California. This tree is along Highway 395. I’ve seen lots of Shoe Trees but this one still caught my attention. Out in the middle of nowhere, it had created its own turnaround point.  Looks like a bumper crop this year! Dad – you’d love to see a crop like this on your cherry or peach trees. 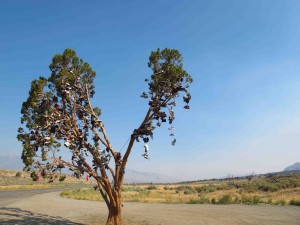 The high desert of Nevada gave way to the Oregon Outback. There was so much open space – it was glorious.  The winds had of course picked up by the afternoon, whipping up the white sand you see.

There aren’t a lot of roads through these desolate areas, nor are there a lot of road signs.  It was 600 miles from Tahoe to Boise, ID, my  next destination which I’d decided to do in 2 comfortable days. Missing a cutoff in OR changed that.  By the time I realized my error, I was well down the wrong road, heading for Bend, OR instead of Burns, OR. By the time I found a campsite, I’d travelled 600 miles and was still 350 miles away from Boise. It was a beautiful spot though – attested by this early morning view. 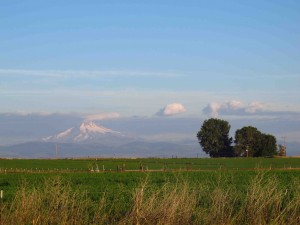 Instead of going back through the city of Bend and then east through a few hours of desert, I opted for the more northern Highway 26. It cuts a beautiful road through the forested mountains, before giving way to desert as it turns south. The desert has its own beauty, just make sure you’ve got lots of water, gas and snacks. It was hot  – 96 deg F. – and there’s nowhere to go to cool off or even find shade. 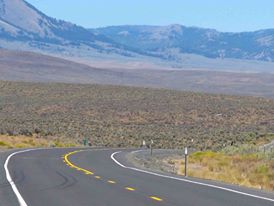 Meeting Diane Norton, avid rider and Tourism Marketing Specialist for Idaho Tourism was like meeting a long-time friend. She gave me a warm reception in Boise and together we decided on the best route to cover – on this trip.

I’d collected a lot of bugs and wanting my bike  photo ready, the kind folks at the Best Western Northwest Lodge provided a hose and rags with which to clean my bike – right there under the front overhand. 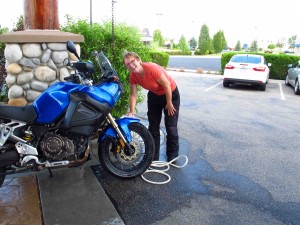 Leaving Boise on Highway 21, my route took me through the historic old town of Idaho City, population 485, once the largest mining town in the Pacific Northwest. 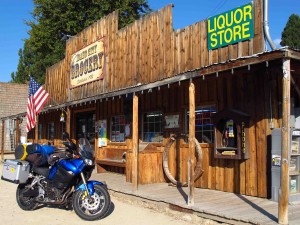 Even though Diane described the scenery I would ride through, I wasn’t prepared for the awesomeness at every corner. Mountains, canyons, river, twists, turns, elevation changes, I had to stop to catch my breath and get my bearings. It’s easy to get completely absorbed in the experience – and really important to stay focused on the road. 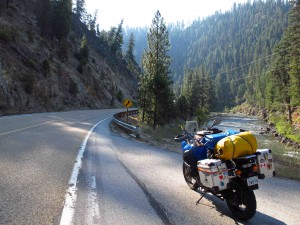 Mother Nature doesn’t stop just because someone puts a road through the pass. This construction crew around the corner was cutting back the hill and creating berms to protect traffic from falling rock. It’s common to wait 20-30 minutes at these stops, so it becomes a social occasion. Of course the flagman was also a rider. 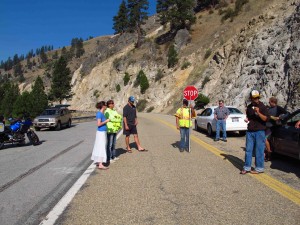 Massive rock walls line the road where it’s been cut through the mountain. These rocks were once living beings  – imagine the energy contained in these formations. 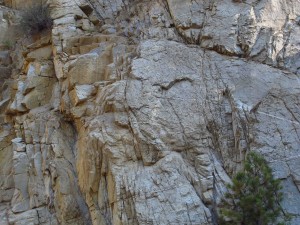 Another view from the same waiting spot, showing the deep canyons, with rivers at the bottom, popular here for rafting. 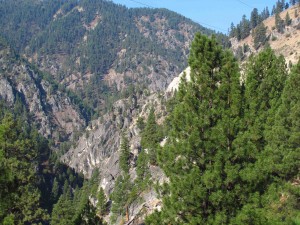 Met these riders on their 5th Wild Hawgs tour. Art & Lori from Florida, John, Ray and Ricky from California.  Art, John and Ricky attended high school together and have remained solid friends. They were on their way to Washington before Art and Lori left the others to follow the Pacific coast south while they headed north into British Columbia. 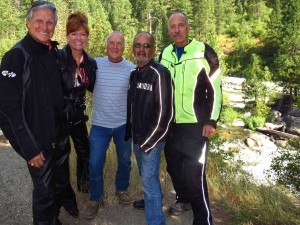 Which brings me back to where I started – astounded and humbled by the energy of the natural beauty that envelopes you as you ride through it. And that was only the first day.

Today, will see where the road takes me – and get back to you!  Safe travels – wherever your road leads.

Route from Tahoe to McCall, ID. 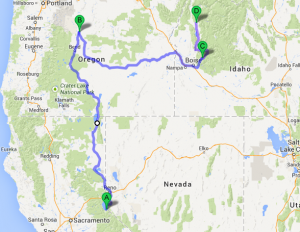