The Power of Community

Motorcyclists are never amongst strangers when we’re with other riders. Yet above and beyond this common bond, a strong community forms when adventurers and travelers gather, virtually or in person. This strength and power of community offers camaraderie and a safety net, which otherwise independent travelers can call on for resources, anywhere in the world. As is the case with John Colyer’s story, one interaction often paves the way for a sequence of events that could never have been predicted. 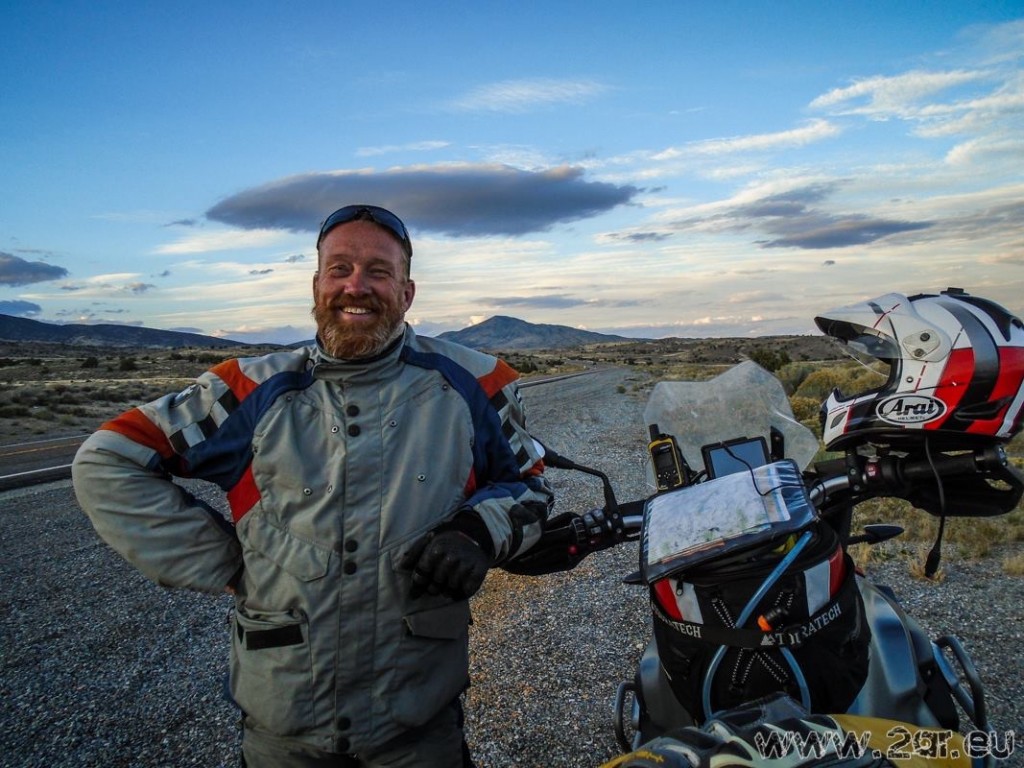 I met John virtually through Rene Cormier last summer for a story I was writing for Rene’s Edmonton-based Renedian Adventures. Renedian conducts highly acclaimed tours in southern Africa and John had traveled with Rene the previous season. I was living and working from the road, on what I expected was a 12-18 month trip through the Americas. As it turned out, John and I were both attending the Horizon’s Unlimited Travelers Meeting in Nakusp, British Columbia, so we agreed to meet up there. Trying to pin John down when there’s riding and socializing to be done was impossible. I left Nakusp without the interview but John was headed back to his home in Calgary, and I was headed to nearby Okotoks so we agreed to meet up or email when there were fewer distractions.

Three days later I crashed 90 minutes east of Calgary shattering my shoulder and writing off my Super Ténéré. I was alone and even before I knew I needed surgery, I knew I needed help with my bike. Without even thinking, I emailed John while another Good Samaritan was driving me to the hospital in his pickup truck. John was at an all-day preparation meeting for ‘photo moto’s’ (carrying photographers for those incredible shots) at the upcoming Tour of Alberta elite bicycle race, yet he still managed to get my bike out of the RCMP impound where it had been towed, and transport it to Calgary. He also drove 20 miles south to Okotoks where I was camped, packed everything up, brought me what I needed and took the rest back to his place. He was a regular, and my only visitor during my six-day hospital stay.

Graciously he and his mother Beryl opened their home to me so I could recuperate prior to making arrangements to return to Ontario. I was there for two and a half weeks during which I was amazingly cared for. All of this from someone who was a complete stranger a week earlier. I did manage to get the interview but only on the eve of my departure.  Read about his African adventure here. 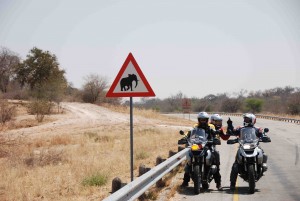 Retired after 28 years with the Canadian Military, first with the Combat engineers and then as an Airforce Aviation Technician, John had recently purchased a BMW 1200GS and was mulling over the idea of an extended trip to South America. It wasn’t a big surprise when I heard he’d headed out on November 28th, expecting to spend at least two years exploring the Americas.

He got off to a great start but two months into his trip, personal business required him to return to Canada. Seeing it as an interruption but not a trip stopper, he made arrangements to store his bike at the home of a British restaurant owner in Puerto Aventuras, Yucatan and flew back to Calgary on January 23, 2015. Unbeknownst to me, he was already having dizzy spells which he wrote off to something minor, like an inner ear infection or wax buildup.

Back in Calgary, all did not go as planned. The personal business took longer to wrap up than expected and those dizzy spells persisted, so John’s idea was to get his bike, attend Overland Expo in Arizona and return home. The neurologist ordered a CT angiogram, calling the day before he was to leave advising him that he had a brain aneurysm and any travel was not advisable. At a follow-up consultation on May 14, John agreed to surgery, which is now booked for June 15th.

Mexico requires a monetary deposit with its Temporary Vehicle Importation Permit to make sure your bike isn’t left in the country. John had to have his GS out by June 10th or lose his deposit and risk administrative nightmares. If he could get it out of Mexico and into the southern US, it would at least relieve him of that worry.

Enter Dave Coe, from Medicine Hat, AB who I also met at Nakusp, and Sharon Faith, from Jackonsonville, FLA, who I have yet to meet in person. I was expecting Dave to send a few sentences back in response to my question but as he did with John, he went way beyond my questions, responding with an extensive story. He speaks right from his heart, and rather than have me try to capture his ardor, go to his blog and read what he wrote here. 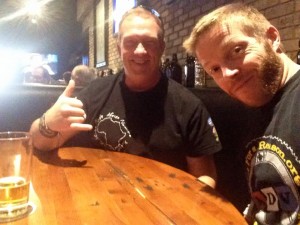 The extent he went to in helping his friend was incredible, riding John’s bike 4,200 km across Mexico to Phoenix in extreme heat, humidity, and time constraints. You’ll be touched by his story and adventures as I was, especially the part about jumping the ditch. 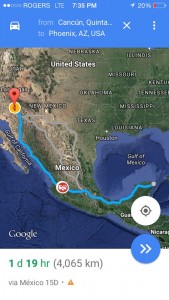 He did it. Delivered John’s GS to another friend Tom in Phoenix, where Sharon Faith would pick it up.

Sharon, an adventure rider from Jacksonville, FLA met John first through mutual friends on Facebook, and then in person during a mini vacation in the Yucatan. Between her 650 VStrom and rentals, she’s traveled to 17 states, Nicaragua, Australia, Baja, and Peru. The interview with John below, is part of her Love of Two Wheels Project where she’s interviewing riders wherever she goes. 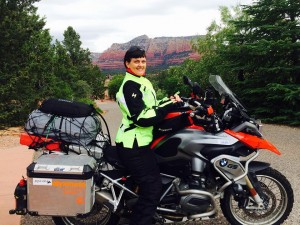 With 10 days off between contracts in June, she’d planned a trip to the Smoky Mountains. When she learned of John’s situation through Facebook, she sent him a message offering to ride his bike home from Phoenix. John agreed, and her trip was in the works. A friend picked her up from the Phoenix airport and drove her to Tom’s house, where the bike was waiting and ready to go, newly serviced and fully fueled. After sharing his knowledge of travel and routes, and breakfast, she was off to Sedona to spend the night with another friend. Sharon’s adding four states, one province, and another country to her map of places she’s been, and seeing places that are new to her, including Bonneville Salt Flats (which were flooded), Shoshone Falls, Teton and Yellowstone National Parks, Montana, and Banff National Park. She’s also helping a fellow rider and remarkable new friend. 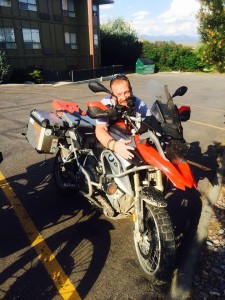 John met her in Kalispell, Montana on Wednesday where he was reunited with Diablo Rojo before riding back to Calgary yesterday for Sharon’s first visit to Canada. She’ll have a few days to experience our spectacular scenery and meet wonderful Albertan adventure riders before flying back to Jacksonville on June 14th, the eve of John’s surgery.

As free and independent as we feel when we’re out riding, that sense is fragile. Rarely are we truly independent, whether it’s asking for seemingly minor help like directions, best roads, or help picking up a tipped motorcycle, or the more complex situations that John is experiencing. I know from my experience with disability this winter how many people it’s taken to get me back in service. John is one of those people and I know he’d unequivocally go out of his way for anyone. While I was there, a freak September snowstorm swept down from the mountains, stranding two friends who’d been out riding. He risked his own safety to drive several hours to trailer their bikes back to Calgary.

Now it’s his turn to accept help. With his assent, I ask that you send special thoughts, prayers, and energy – whatever works for you–for John as he faces this biggest challenge of his lifetime. He’s hoping to be online soon after surgery and your comments and well-wishes will mean a lot. Post them below, or better, on Facebook either with this post or on his timeline. In either case he’ll see them. I know it will make a difference to someone who’s made a difference to many others. And who will again.

6 Comments on “The Power of Community”