Book Review – Through Dust and Darkness

When I saw the description for Jeremy Kroeker’s second book Through Dust and Darkness, I was immediately intrigued. It describes a Mennonite on a motorcycle, questioning his faith and seeking enlightenment riding through the Middle East. 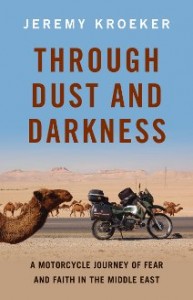 It’s a great plot to begin with, but given that a motorcycle came into my life as the Mennonite was exiting, I sensed we might have a lot in common. I was curious to see where his questioning had taken him and how it had shaped him.

Through Dust and Darkness combines a fascinating account of his travels through Turkey, Syria, Lebanon and his ultimate goal – Iran, woven into his search for meaning.

“It had always bothered me that God expects so much of us while refusing to show himself plainly. Some say that God can’t reveal himself because that would nullify our faith.

Parachuting from his fundamentalist Christian upbringing on the vast Canadian prairies into the choking cities of the Middle East, with their minarets, irrefutable expectation to answer the call to prayer five times daily, and brilliant Muslim mosques with gilded, mirrored shrines, is one way of learning to see things from a different perspective. At first it seemed the only things that connected them were the roads between New Testament cities, which came alive under his KLR650.

There are many times when he was describing travel and his interactions with other people that I wondered what he was thinking. Perhaps he was processing his thoughts and waiting for the right time to let them out because he was certainly more open with his musings towards the end.

“I wondered, not for the first time, whether the faint hope to which I clung only remained because I had been dropped into a certain faith at birth, placated with simple answers before I could form complex questions.”

Aside from the search for meaning, Through Dust and Darkness is an engaging account of travel in countries most of us will never visit; countries, people and issues we “learn” about through network news. It held my attention right to the end.

I admired Kroeker for his courage and vulnerability, to travel solo via motorcycle in such a diametrically different world, and then to be so transparent with his seeking. Whether he’s describing the scenery, the people or his internal quest, he does so with innocence, curiosity and humor. He is searching for truth and does an excellent job of staying objective, open to alternative belief systems and accepting. The world would be a very different place if more of us adopted that perspective.

I highly recommend this book. Kroeker will take you to souks and deserts of the Middle East, have you thirsting for water, trying to find accommodations in completely foreign and relaxing over tea with new friends. The welcoming style will draw you in and accompany you right to the end!

Through Dust And Darkness is published by Rocky Mountain Books, RMBooks.com, 320 pages, $20. It’s available through the author’s website www.motorcycletherapy.com. It’s also available at major retailers in print and digital formats.

4 Comments on “Book Review – Through Dust and Darkness”