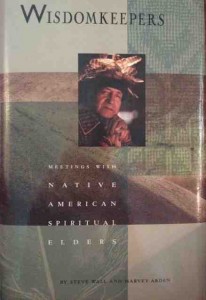 “Just off the map, beyond the Interstates, out past the power lines and the shopping malls, up that little side road without a sign on it, lies the land of the Wisdomkeepers. Hidden from the mainstream of contemporary life, these living treasures of traditional Native America are revered among their people as the Elders, the Old Ones, the Grandfathers and the Grandmothers—the fragile repositories of ancient ways and sacred knowledge going back millenniums. They don’t preserve it. They live it. “

So begins Wisdomkeepers; Meetings with Native American Spiritual Elders, by Steve Wall and Harvey Arden. Approached in late 1981 by a Cherokee medicine man while working on an unrelated assignment in North Carolina, that meeting set off a ten-year odyssey, traveling across the land and meeting with spiritual Elders of more than a score of Native American nations. The purpose was to capture and preserve ancient wisdom in writing and photographs, and share this message with anyone who will listen. As old as this message is, it is never more relevant than today. Published in 1990, the words of the Wisdomkeepers are timeless, with the urgency of their words increasing in the intervening years.

Newly single and jobless, both by choice, I set off on Monday August 4th, 2003 for a two-month motorcycle journey around North America. Even then, I was drawn to explore Native American spirituality, particularly as it applies to earth-wisdom and our role in nature. On a blistering hot August day, I visited the Wanuskewin Heritage Park, a national historic site, and a Northern Plains Indians cultural interpretive center just outside Saskatoon, Saskatchewan. In Calgary, Alberta, it was the Glenbow Museum, showcasing the history of Southern Alberta and the Canadian West, where I delved more deeply into the indigenous history. I knew very little about the British Columbia’s Coastal First Nations before being swept away by the exhibits and artifacts at the Royal BC Museum in Victoria, British Columbia. The seeds that were nurtured during that trip, continued to germinate, albeit passively. But then nature is never passive, even though it appears that nothing is happening.

On Monday August 4th, 2014, I will set out on my motorcycle, exploring this wisdom in much more depth. This time, the trip is open-ended and will encompass North, Central and South America. I purchased Wisdomkeepers as part of my research for this trip. In powerful photographs and words, Wall and Arden have documented a timeless message that applies as much to us today, as it did 10 thousand years ago. Through legends and stories, they recount the sacredness of all life, ‘”new” perspectives about country and community and the sacred circle or hoop, one of the fundamental symbols of Native American culture. There are many circles, but the most sacred is the circle of life, of which mankind is only one part of.

Throughout its pages, the message is one of harmony and balance. It’s summed up well by Leon Shenandoah of the Six Nations Confederacy who says, “These are our times and our responsibilities. Every human being has a sacred duty to protect eh welfare of our Mother Earth, from whom all life comes. In order to do this we must recognized the enemy—the one within us. We must begin with ourselves.” And so it begins with me.

Wisdomkeepers is published by Beyond Words Publishing and available through Amazon.