Listen, chat with, learn, and get inspired by Debbie at the Power of the Road online conference, later today.  She’ll talk about the life lessons motorcycles have taught her and how they’ve enabled her to become successful as a person, wife, mother—and one of Hollywood’s stop stuntwomen.

Debbie Evans Leavitt is considered one of Hollywood’s top stuntwomen. She began riding motorcycles at age six and competing at age nine. In 2003, she was inducted into the American Motorcyclist Association’s Motorcycle Hall of Fame. 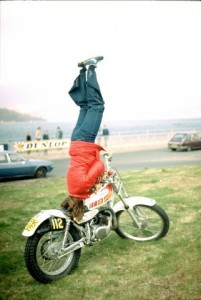 Debbie never let other people’s perceptions of what she should be able to do stop her from doing anything extraordinary. She says if she had, she would never have accomplished anything extraordinary. She’s such a success today, because she can shut off that thing that says, “No, you can’t do it.” Or, “It hurts too much. Stop!” You’ll never get to the finish that way.

Her first motorcycle came from a junkyard, It was a box of parts, all spray-painted blue, even the wheels. Wearing a hood to protect her eyes, she stood at the wire wheel, meticulously cleaning every part. Then she and her dad put it all together. She had her first bike—and schooling in mechanics and patience.

As a kid, she didn’t fit in much because she was a tomboy and got a lot of ridicule. She loved anything active and outside, and because no other girls were riding at her level, she competed against the boys. When she got out on her motorcycle on the weekends, she thought, “Who cares?” You guys are all a bunch of losers.” In fifth grade she was already riding with the wind in her face and all that junk was falling off behind her. 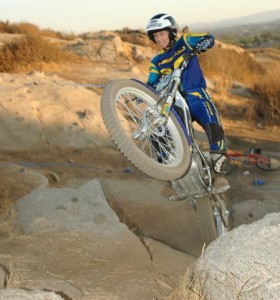 Debbie always liked trials because of the challenge. She enjoyed competing against herself as much as someone else. She could go off, find a challenging rock and just keep going at it until she made it over. In other riding, a desert enduro taught her about perseverance. 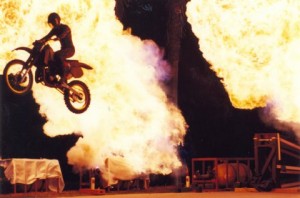 All those lessons from motorcycles paid off. She has appeared as a motorcycle stunt rider and stunt performer in over 300 movies and television programs. She has won seven Taurus World Stunt awards for her work in The Fast and the Furious (twice), Date Night, Taxi, The Matrix Reloaded in which she was the Trinity double, Superman Returns and Wanted, in which she doubled Angelina Jolie. She’s currently working on the Fast and the Furious 7. For a list of her movie credits, check out her profile here. 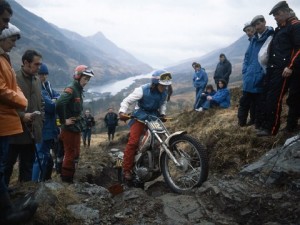 Debbie was the first woman to ride well enough to compete against the men at the National and World Championship level in the Fédération Internatioale de Motocyclisme’s Trials World event in 1978.  As the only woman among 280 entries at the Scottish Six Days Trials she finished fourth in the under 250cc class and 109th overall, effectively silencing the British men who were betting on which day she would DNF (Did Not Finish). She’s road-raced at Daytona and won many trophies for desert enduros. 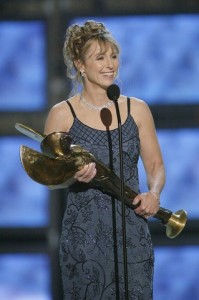 She was a girl. She wasn’t supposed to play sports. She wasn’t supposed to ride motorcycles. When she got into the business she was told, “You can’t be married and be a stunt woman. It just doesn’t work. None of the marriages work.” Or, “If you have kids, you can kiss you career goodbye.”  She has been married for 35 years and raised three children, proving that women can balance career and family.