lizjansen Posted on April 4, 2014 Posted in Leadership No Comments

Power of the Road is a non-partisan, borderless conference, focused on interconnection, inclusiveness, and common ground. Having said that, I believe it is fundamental to honor men and women in the military who have served to protect our rights and freedoms, often doing so outside of our borders. It’s what allows most of us listening the freedom to enjoy our lives, whichever country we were born into.

Two of our speakers, from different countries have taken this on as a personal mission in very different ways. You’ve already met Trapper Cane. Now meet Gina Woods. Remember that today, and every Friday, is Red Shirt Friday. Wear red in honor and respect.

Gina’s been riding motorcycles for 18 years, currently on a ’49 Panhead. She co-founded and hosts a motorcycle radio show, has worked as a marketing director for a local (Chicago) Indian Motorcycle dealership, and organizes events at major motorcycle functions.

Most recently, Gina created a team of three American Women Veteran bike builders who built a Trike at the Chicago IMS Show to benefit DAV (Disabled American Veterans). They followed that up with a trip to Bruce Rossmeyer’s Destination Daytona during Bike Week to build an American Veterans’ Bobber from the ground up, in front of a live audience. 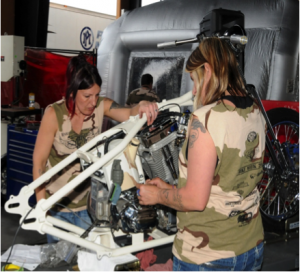 The HER–Honor, Encourage, Recognize–Project bikes will go now on a raffle tour across the country, with proceeds benefitting DAV.

Women in motorcycling and women in the military share a common spirit of adventure and strength. Gina and team, several who are veterans themselves, wanted to give back to American women veterans. so it seemed like the right time for this project. 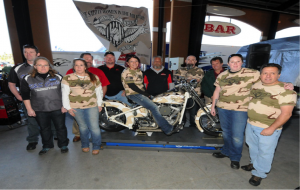 The HER project is dedicated to empowering and creating awareness for American women veterans, with respect and dignity. Through HER, they’re educating the public about the sacrifices and needs of women veterans having difficulty transitioning back to civilian life.

Gina Woods is also a single mother whose son and daughter share her love of motorcycles. She just bought her son Jake his first dirt bike.