lizjansen Posted on April 7, 2014 Posted in Life Lessons from Motorcycles No Comments Tagged with courage, leadership 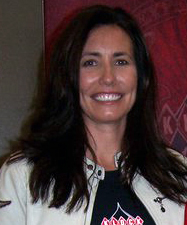 Listen, chat with, learn, and get inspired by Laura at the Power of the Road online conference, starting today April 7  until Friday the 11th, 2014. Laura will talk tomorrow afternoon about her life experiences and how motorcycling has been with her down Any Road she’s travelled.

Named Cycle Source Magazine’s Motorcycling Woman of the Year in 2008, and again in 2011, Laura Klock is described as “a true enthusiast, a real person with a great sense of self and purpose”. Working as Vice President of Klock Werks Kustom Cycles alongside her husband Brian, they have grown their company to over 450 Klock Werks Brand part numbers, including their well known, patented FLARE™ Windshield.

In 2006, Laura set a national land speed record on a bike they built for the Discovery Channel Biker Build-off, making her the pilot of the first “World’s Fastest Bagger”.

Each year, Laura has returned to Bonneville and improved her own record, racing the second year with her eldest daughter, Erika, who at 16 years old at the time set her own land speed record. Her younger daughter Karlee joined them in 2008, and at 14 years old became the youngest to ever set a record on the salt. Laura, Erika and Karlee are the first mother-daughter-daughter trio in history of land speed racing to hold records at the same time.

Laura would tell you her two daughters are her greatest accomplishments. Having them follow in her footsteps— riding and racing, has made her proud beyond words. 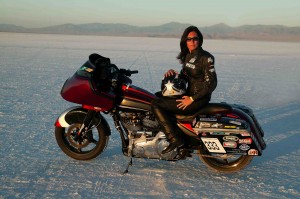 Laura has participated in all woman bike builds, was Crew Chief for “Team Effie” in the Motorcycle Cannonball, is a MotorMaid, a certified MSF RiderCoach, and the facilitator of programs to strengthen the lives of at-risk youth through her non-profit, Helping with Horsepower™.