Looping Back to Ontario

This week I arrived back in Orangeville, Ontario, after a four-day road trip across much of Canada, from Calgary, Alberta. I’ve settled into temporary quarters in a cozy cabin while I search for somewhere to overwinter and heal. This wasn’t in my plans when I set out on August 4th and the large-scale changes which have taken place in the last few months are a challenge to wrap my mind around.

In times like these, my best strategy is to retrench, prioritize, and focus only on the immediate. Just as the muscles and soft tissue in my injured arm will not allow me to move beyond a certain range, so too my mind will only allow me to think about the present. I need that energy to get better and back on the road—and be open to the gifts o this time.

Many have asked about my plans to continue my Wheels to Wisdom quest. Realistically, I can’t even think about it just yet, although I know that they’ll become clear when the time is right. This is merely a detour during which I can grow and gain strength in body and spirit, and prepare for what lies ahead. And figure out my what my next bike will be. 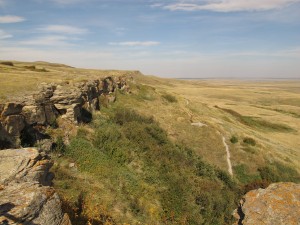 Just because my bike is gone doesn’t mean I haven’t been able to continue my quest. While in Calgary, I visited Head-Smashed-In Buffalo Jump near Fort MacLeod. Designated as a UNESCO World Heritage Site in 1981, it has been used continuously by aboriginal peoples of the plains nearly 6,000 years. Not only does it typify a method of hunting practiced, it holds a wealth of indigenous wisdom that is still relevant. 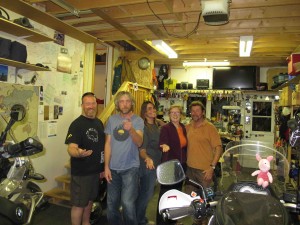 There was also an opportunity to visit with fellow adventurers John Colyer, Jeremy Kroeker, Nevil and Michelle Stow. Jeremy’s traveled through Central America and the Middle East; nine months after suffering a stroke in 2009, Nevil rode to Alaska, followed the next year by a trip around-the-world. 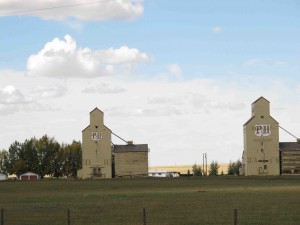 Before leaving Alberta, I had to return to the accident site. Everything happened so quickly on that day, I wanted to see if it was as I remembered, and understand how I could avoid a repeat. More importantly, it was paramount that I leave an offering of gratitude for protection from more severe injury, and seek understanding of my path forward. These grain elevators were nearby, symbolic of the bucolic surroundings, harvest and thanksgiving.

Outstanding kindness and friendship have characterized the path to this point. Special gratitude goes to Barbara Wynd who drove all the way from Ontario to Calgary and then turned around the next day and drove home. The road trip across the plains and through northern Ontario was filled with sunshine, blue skies, fluffy white clouds, and warm temperatures. Bald eagles graced us with their presence throughout the journey—a good omen to be sure. 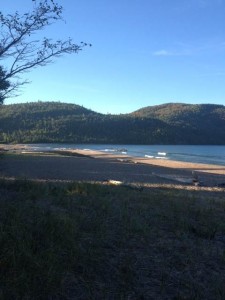 Now it’s time now to wait, heal that broken wing and let the revised route unfold. Photo shows a beautiful Lake Superior morning yesterday on the last leg of the trip back to Ontario.

6 Comments on “Looping Back to Ontario”