Discovering Gold in Chaos—Adapting to Change 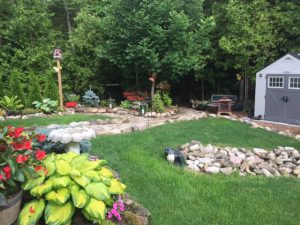 My house move is over and I settled into my new place within a day. As upsetting as it was to get evicted (slight embellishment), it’s been like discovering gold in chaos.

There were two ways to react when I was asked to leave—get angry over the disruption to my life and unplanned expense, when I was trying to finish writing the first draft of Crash Landing, or accept it and move on as quickly as possible. There was no sense diverting and wasting energy on the former. The best thing to do was to pack up and move on.

Realistically, I wouldn’t have discovered had this place had it not been forced on me. Just five doors down from where I was and backing onto the same ravine, it’s much brighter and filled with joyous energy. That it was even available when I needed it was another gift.

It’s quiet and my motorcycle has a special space in the garage. My landlady pours her heart into her family and gardens. Front and back yard are a profusion of vibrant blooms. The back yard, where I walk out, is a delightful place of whimsy and beauty. It’s perfect for the creative lift I need now.

Measha (my cat) loves it too. She was feeling trapped at the old place because of the dog and had stopped going outside. After four days here, she was ready to patrol the back yard again. I let her wander while I was working in my outdoor office and she was back within 10 minutes with a gift of gratitude. 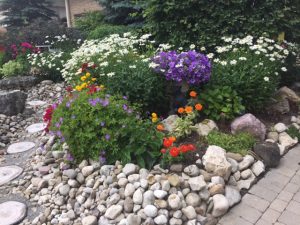 The process of moving has been another gift. Although I’ve pared down on stuff over the past 15 years, I’m nowhere near minimalism. Touching and packing everything you own is a good exercise to assess whether it’s really necessary.

And so I lightened the load even further. For example, I realized I’d moved a big plastic bin of yarn I’d collected from my years of knitting four times. That yarn could be keeping someone warm so I sent it to a place that knits for those in need.

Anything I’d lugged around for more than one other move and hadn’t used, also got donated. There wasn’t that much, but I filled my panniers twice and shuttled stuff to a second-hand store in town where all proceeds go to a local charity.

It’s so liberating to let things go. It was even more meaningful and easier this time as I write about how the experiences of my ancestors have shaped me. Through extremely challenging times, my grandparents learned early in life how little material things meant, and how important relationships—with others, self, and Spirit—are.

I still have one big area to tackle – and that’s my digital collection. It’s easy to save and store files and I have a minimum of two back ups of everything. All of that takes room and creates clutter. But that’s a job for another time.

How have you discovered the gold in what at first seems troubling? Tell us in the comments.

6 Comments on “Discovering Gold in Chaos—Adapting to Change”