The Motorcycle Art of Surrender 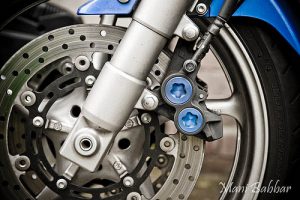 A motorcycle has been one of my greatest teachers throughout life. Most recently it’s become a primer for the Art of Surrender, demonstrated through riding on gravel. Even when we don’t intend to end up on the loose stuff, construction, a detour, or a wrong turn can take us there.

It’s easy to slip into the illusion that we’re in control. On the other hand, practicing the Art of Surrender and letting go is a hard lesson.  Ironically, it’s more effective in getting us to our destination.

To get the motorcycle parallel right, I sought the counsel of off-road guru Clinton Smout, world-class trainer and founder of SMART Adventures.

Here’s what he had to say. Pay particular attention to his second point as it pertains to surrender.

“The motorcycle is searching for traction in soft terrain, especially in deep sand. So our reaction as pavement riders is twofold:

Shut off the throttle because we’re scared. We don’t want more speed. That makes it worse because now all the weight goes forward onto that front tire. It tries to burrow. An analogy that I like to use is a boat in the water. When you give it throttle, the bow, the front of the water comes up out of the waves, fantastic for steering. You let off the throttle and the bow sinks in the waves, it’s horrible sluggish steering. That’s the same as our two-wheeled vehicles in loose terrain. If you can’t accelerate, at least down shift so you’re in a position with crisp throttle response. And if it’s a long expanse of sand and gravel where it isn’t prudent to keep accelerating, blips of throttle shift our weight back and keep our front end light.

The second instinct we must fight is not to white knuckle the bars. Because again, as humans, we’re scared. When our mom’s backs were a lot hairier and we were swinging through the trees, we hung on like crazy because we were scared. On a motorcycle when things go wrong, most of us instinctively white knuckle the handlebars. It’s the worst thing you can do because you’re not going to be able to make that thing go exactly where you want. The front wheel’s only moving 2 or 3 inches. It feels like it’s going to go in the ditch but it won’t. An analogy you use is put an imaginary egg in each glove and let it wobble.

Blip the throttle or downshift to a steady throttle at a lower gear, lower your speed, and relax the grip. And the bike will go a lot straighter because it’s finding its own way. As long as it’s going west and that was your choice, let it wobble a little. It’s disconcerting and that’s why we want to slow down with gear drops.

It’s better to keep momentum and the weight to the back. It’s counter-intuitive. Who would think of giving it gas or keeping the speed when things get crazy? That’s the secret.

So too with learning the art of surrender in life. It’s not about rolling over or giving up. Surrender is about taking an active role but knowing that letting go is much more effective than trying to muscle through a situation, or believe you can control the outcome with sheer will.

Hanging on may work for a while, but ultimately, you’ll find yourself more effective and less stressed by surrendering. You’ll also find out a lot more about yourself and what you’re capable of. Sometimes we’re so anxious to be in control we lose sight of who we are and how our story figures into the big picture.

Let it go. Just like the front motorcycle wheel finds it’s way through the rough stuff when you allow it to, so too will you.

2 Comments on “The Motorcycle Art of Surrender”