Stand out from the Crowd

Last weekend, I arrived back from West Virginia to attend the Canadian Schoolboy Regatta in St. Catharines, Ontario and watch my niece and nephew compete with their respective crews. As it turned out, the winners had to call on more than their finely tuned physical skills.

Stand out from the crowd 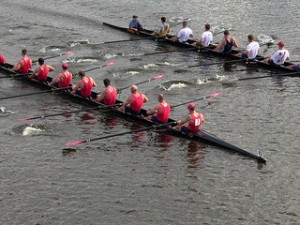 Athletes from across Canada train on a grueling schedule for months, beginning when it is still cold and dark, getting up at 4:30 a.m. to workout first on land and once it’s warm enough, on the water.

Unfortunately, the weather played havoc with the most carefully laid regatta plans. High winds forced officials to suspend the races for much of Saturday. The waiting and uncertainty stressed students primed to peak athletically.

When races were able to resume late in the day, the distance was cut in half to run as many heats as possible. Crews who were prepped to race 2,000 meters found themselves rowing in a very different race.

Although a few semi-finals ran early in Sunday morning, the wind picked up again and the remainder of the regatta was cancelled. Standings were determined by best times in races completed.

Naturally it was a huge disappointment for everyone – especially the students, some of whom were racing with their schools for the last time before dispersing for post-secondary studies.

While there’s no doubt the eventual winners were expert oarsmen and oarswomen, what set them apart was their ability to maintain focus and deal with change under trying circumstances.

As so often happens in life, events beyond our control can change everything in an instant. We can’t control much of what happens, but we can control the choices we make and how we respond. And that’s what differentiates the winners.

Whatever we choose to do, whether it’s following our dream or riding a motorcycle, a solid skill base is fundamental for success. But beyond that, the winners are determined by how well we can reach inside and draw on our strengths.

And just like our technical skills, they’re only developed through training, exercise and hard inner work. Anyone can be mediocre. But it’s the strong who stand out from the crowd.

photo credit: kisses are a better fate than wisdom via photopin cc

4 Comments on “Stand out from the Crowd”