Women Riders Speak is an interview series with female motorcyclists. Through their stories, they illustrate the transformative relationship between women and motorcycles.

Rose Davidson, who lives in New York City, talks about her determination to become a rider.  After passing the MSF course on her second try (after private lessons), then riding around her block “a thousand times” to gain confidence, she’s travelled 40,000 miles in 5 years. 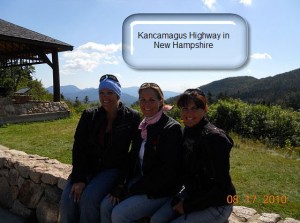 I thought about riding when I was a teenager, having been a passenger on my father’s and uncle’s bikes.  But life got in the way and I never got around to it.  (Plus my mother would have KILLED ME!)  When I was about 45 years old, I started riding on the back of my significant other’s bike and grew to love it.  After taking the weekend MSF course and failing miserably (actually crashed the bike a few hours into the class!), I put my dream on hold again.

Our HOG (Harley Owner’s Group) club took a cross-country trip in 1996 (6,500 miles from NY to CA and back, in 16 days) and, sitting on the back, I found myself jealous of the women who were riding their own.  I kept talking about it until a few months later when my S.O. surprised me with a 2003 Sportster!  Now determined, I took private lessons until I was ready for the MSF course and finally passed!  I was 48 years old.  That was almost 5 years and 40,000 miles ago!

I think I rode the 4 square blocks around my house at least a thousand times!  Every time I started preparing to practice, my stomach would begin fluttering.  But I needed to accomplish this and become a good rider if it killed me!  I remember wondering if it would ever be fun!  Until one day, when I was crossing a bridge over Long Island Sound that I realized I was actually enjoying myself!  That was probably 6 months after I started riding.

In early 2008, my friends and I started planning a trip to the Harley Davidson 105th Anniversary party in Milwaukee.  We wanted to mimic much of our club’s 2006 cross-country trip.  Starting with about 15 participants, there were only 5 of us when it was time for the trip:  me, my 2 girlfriends, my S.O. and another male friend.  Then the guys broke the news to us that they couldn’t get off work.  We 3 girls looked at each other and said “Could we possibly do this alone?  Or do we have to cancel the trip?”  We decided to do it ourselves!

I had been riding for only a year and a half and had already traded my Sporty in for a 2008 Heritage Classic. I was a nervous wreck about riding that far without a big group.  But we did it!  We spent 10 days on the road “alone” and got as far west as Jackson Hole, Wyoming before heading back to Sturgis and then up to Milwaukee for the rally.

By the time we got toMilwaukee, we were minor celebrities – no kidding!  Other bikers on the road would say “Oh wait, are you those three girls from New York???”  We caught people taking pictures of us inYellowstone Park and in the Grand Tetons.  When “the guys” were on their way out to meet us in Sturgis, they stopped in a restaurant in Nebraska.  The waitress heard their New York accents and said “That’s funny, we had 3 ladies from New York in here just last week – do you know they were travelling all alone?!?!”

I am so impressed by the number of women I see joining our ranks every day!  We put our fears aside and we go for it!

My greatest joy is the freedom I feel every time that wind hits me in the face.  And the camaraderie between bikers.  I have never had such loyal and caring friends in my life.  Learning to ride is the best thing I ever did.  I only wish I had started sooner!

I am proud of myself for hanging in there.  There were times when I never thought I’d get it, but I did.  And now I’ll travel just about anywhere and love every minute of it!