Barely five feet tall, Cheryl, a management and program analyst for the Department of Defense, Navy Branch, knew that by far her most challenging obstacle was going to be her height.  She credits motorcycling with getting her over the vertically challenged phobia which affected just about everything she did. 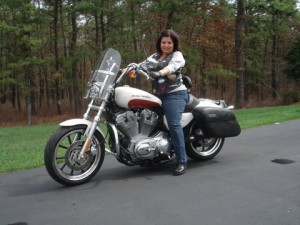 I have ridden on the back of my husband’s motorcycle for many years and loved it. Until one day when I became aware many women in my HOG club were riders of their own. The idea to ride my own grew. I was turning the “BIG 50”, a woman, and barely five feet tall. By far my most challenging obstacle was going to be my height.

I decided to “Bring It On”! I took the beginner’s course, passed and have been riding for three and a half years. My biggest support has come from the women and men in my AMA (American Motorcyclist Association) bike club family.

The first one was turning corners and throttling on my 250 Honda Rebel.

Next was being able to completely touch the ground when I stopped my 883 Sportster Low. This bike was very top heavy and I tipped it many times when parking. After having my riding shoes modified, the seat lowered and a few other modifications, I was getting the hang of it. When HD came out with the Superlow I was thrilled: a 4.5 gallon tank, fatter tires and a motorcycle very much made for people like me. I absolutely LOVED the riding experience and being able to keep up with the bigger bikes.

Motorcycling got me over the vertically challenged phobia which affected just about everything I did — from buying clothing, to reaching kitchen cabinets, to standing at an outing with tall people in front of me and even climbing on the lowest ledge in a grocery store to get a product off of the shelve. Those obstacles haven’t gone away but I now look at them in a different light. There isn’t anything that is an obstacle any longer if you believe in yourself.

I’ve travelled the Blue Ridge Parkway, lots of New Jersey back roads, Cape Cod, the Catskills,  Adirondacks,  Alex Bay, and Nova Scotia. I’ve ridden down Highway 1 in California, the desert, North and South Dakota, been to Sturgis, Mount Rushmore, Yellowstone, and Jackson Hole, Wyoming. In Montana I’ve stopped at Billings and Cody and I’ve been to Idaho. Each of these trips is another story.

What impresses you most about another women rider?

I adore the fact more women are traditionally stepping up and finding the freedom with riding their own bike. There is something to be said about the independence of being on your own bike.

Having learned how to ride a motorcycle is such an accomplishment for me. I feel renewed when I am out on a ride. I’m able to take my thoughts to many places and get lost in the moment, while maintaining complete control.

It’s a feeling very different than leaning how to ball room dance or playing golf. Since I began the beautiful hobby of riding, it has allowed me to know that I can do whatever my mind sets out to do. Motorcycling gave me the challenge and the courage to succeed. Just like being a child and falling down when beginning to roller skate, you just get right back up and are determined not to fall down the next time.

It seems like eons ago that I was just a beginner. I’ve since taken advanced courses and have gained so much confidence through all my experiences.  I may always ride a Superlow because of me being vertically challenged but know that I can ride with sheer confidence as my hair blows in the wind.